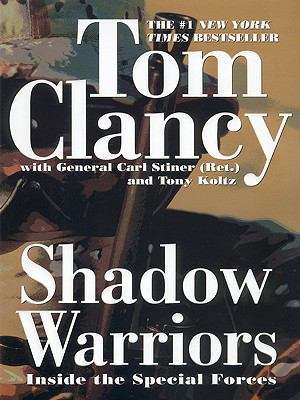 The first two Commanders books, Every Man a Tiger and Into the Storm, provided masterly blends of history, biography, you-are-there narrative, insight into the practice of leadership, and plain old-fashioned storytelling. Shadow Warriors is all of that and more, a book of uncommon timeliness, for, in the words of Lieutenant General Bill Yarborough, "there are itches that only Special Forces can scratch."

Now, Carl Stiner--the second commander of SOCOM, the U.S. Special Operations Command--and Tom Clancy trace the transformation of the Special Forces from the small core of outsiders of the 1950s, through the cauldron of Vietnam, to the rebirth of the SF in the late 1980s and 1990s, and on into the new century as the bearer of the largest, most mixed, and most complex set of missions in the U.S. military.

These are the first-hand accounts of soldiers fighting outside the lines: counterterrorism, raids, hostage rescues, reconnaissance, counterinsurgency, and psychological operations--from Vietnam and Laos to Lebanon to Panama, to Saudi Arabia, Kuwait, and Iraq, to the new wars of today...