The Jazz of the Southwest 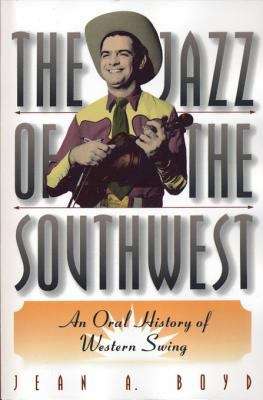 They may wear cowboy hats and boots and sing about "faded love," but western swing musicians have always played jazz! From Bob Wills and the Texas Playboys to Asleep at the Wheel, western swing performers have played swing jazz on traditional country instruments, with all of the required elements of jazz, and some of the best solo improvisation ever heard.

In this book, Jean A. Boyd explores the origins and development of western swing as a vibrant current in the mainstream of jazz. She focuses in particular on the performers who made the music, drawing on personal interviews with some fifty living western swing musicians. From pioneers such as Cliff Bruner and Eldon Shamblin to current performers such as Johnny Gimble, the musicians make important connections between the big band swing jazz they heard on the radio and the western swing they created and played across the Southwest from Texas to California.

From this first-hand testimony, Boyd re-creates the world of western swing-the dance halls, recording studios, and live radio shows that broadcast the music to an enthusiastic listening audience. Although the performers typically came from the same rural roots that nurtured country music, their words make it clear that they considered themselves neither "hillbillies" nor "country pickers," but jazz musicians whose performance approach and repertory were no different from those of mainstream jazz. This important aspect of the western swing story has never been told before.