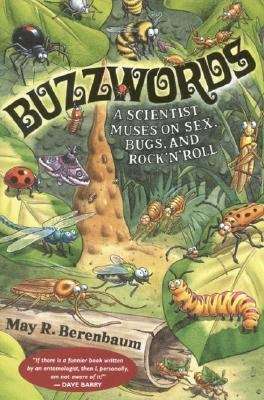 What sort of person devotes their life to the study of bugs? How do you picture your average, every-day entomologist? "I've been photographed on several occasions," writes author May Berenbaum, "and it seems that every time, photographers ask me to pose in one of three ways: seated in front of a microscope, with an insect (usually a cockroach) on my face, or with an insect net clutched in my hand."In Buzzwords, Berenbaum expertly blows away these stereotypes with short takes on all things entomological--from the story of a pet ant kept for 14 years to major motion pictures featuring cockroaches.Buzzwords showcases the Best of Berenbaum, a selection from her humor column in the American Entomologist professional journal, accompanied by a number of original pieces written for this book. "I know people are reading these columns," she notes, "because they write me letters that point out all the mistakes I've made!"The book comes in four parts: How entomologists see insects, including their view of a U.S. government plan to eradicate illicit coca fields by dropping caterpillars from airplanes.How the rest of the world sees insects, with Berenbaum's proposed classificatory scheme for placing Spider Man, Firefly, and other cartoon superheroes into well-defined taxa.How entomologists view themselves--featuring Bambi Berenbaum, a gorgeous entomologist created for an episode of TV's popular "The X-Files," whose character was inspired when the scriptwriter consulted Berenbaum's books.How entomologists see their colleagues, with various views on scholarly citation, motion sickness, and more. Along the way are some thought-provoking observations--for example, about the impact of television on public knowledge of science. In one poll, Berenbaum writes, 35% of adults said they believed that prehistoric humans coexisted with dinosaurs, a la the Flintstones.Berenbaum even takes on the controversy over alternative medicine, fearlessly purchasing Chinese medicinal insects during a professional trip to Vancouver, which also happened to be her honeymoon. "Okay, so maybe giving two talks at an International Congress of Entomology is not everybody's idea of a romantic honeymoon venue, but it seemed like a good idea at the time."Berenbaum is a noted scientist in a field that doesn't always gets the respect it deserves, but she shows us that there's a fun and even freaky side of life with insects. While working on the University of Illinois' annual Insect Fear Film Festival she received a letter from a "crush freak" who waxed lyrical about a young, sexy babe with a size 9 or 10 shoe. Berenbaum writes, "On the one hand, it's almost gratifying to think that insect pest management can arouse people's interest to such an extreme extent. On the other hand, it has convinced me not to list my shoe size in the biographical sketch of my next book."Readers will appreciate learning how the word "shloop" was introduced to the medical literature when physicians used a metal suction tip to remove a cockroach from a patient's ear canal, and how one investigator named a series of subspecies bobana, cocana, dodana, and so forth, "anticipating by 60 years the song, 'The Name Game,' by Shirley Ellis."Although you'll chuckle all the way, Berenbaum has the last laugh, giving powerful lessons in the spectacular diversity of the insect world and the nature of scientific discovery, cleverly packaged as witty observations on subjects far and wide.If you're a scientist or you like reading about science--better yet, if you've ever found a fly in your soup (or worried that you might have unknowingly just slurped one down with your tomato bisque--this book is for you.

Hakimiliki:
2000 May Berenbaum and the Entomological Society of America.