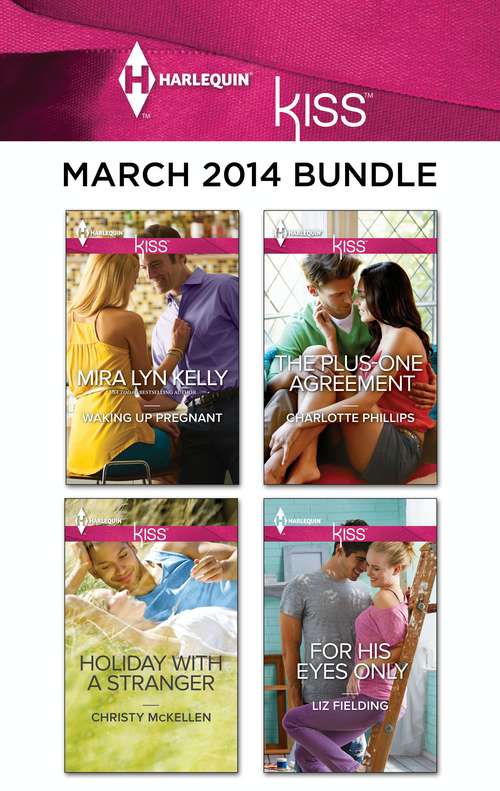 This month, experience the true art of flirtation that Harlequin KISS brings with four original stories in one, fun and sexy bundle! Titles include Waking Up Pregnant by Mira Lyn Kelly, Holiday with a Stranger by Christy McKellen, The Plus-One Agreement by Charlotte Phillips and For His Eyes Only by Liz Fielding.

WAKING UP PREGNANT: Waitress Darcy Penn is the smart, sensible type—flirting with the extremely cute guy in the bar just isn't her usual style. As for ending up in his hotel room? Definitely not! Sneaking out while he's in the bathroom to avoid the post-sex awkwardness? Much more like it….

If Darcy had stuck around, Jeff Norton could have told her about their "epic latex fail." So he shouldn't be quite so shocked when months later, Darcy turns up at his classy L.A. office and throws up in his wastepaper basket. She's got a bad case of morning sickness, and she's here to find out what he's going to do about it!

HOLIDAY WITH A STRANGER: After three months travelling all Connor Preston wants to do is sink into his own bed. The last thing he expects is to find a stark-naked woman already there...

Josie Marchpane wasn't anticipating company either. Connor might be six foot four inches of pure muscle, and boast a disturbingly sexy smile, but a fortnight in the South of France is the one thing standing between Josie and her sanity - and she's not about to give it up without a fight!

Josie plays to win. The problem...? Connor does too. And, with only one bed between them, things are about to get interesting...

THE PLUS-ONE AGREEMENT: Emma Burney might not have a man, but she has a very practical solution for that: the plus-one agreement. A guaranteed date for any occasion. The problem? Her date is the gorgeous Dan Morgan, the man she lusted after for years.

Dan is all about keeping it casual, so when Emma decides to call it quits on their arrangement, he isn't bothered. Well, maybe there's just a little bit of dented ego. After all, he's always prided himself on his plus-one prowess. So when Emma begs just one last date…suddenly he's got something to prove!

FOR HIS EYES ONLY: "It's your body that I want to draw, not your clothes."

Well, that's what she was afraid of! Hardworking estate agent Natasha Gordon finds her reputation in tatters when an ad she created gets bungled. She'll do anything to restore her good name—even beg seriously sexy artist Darius Hadley to give her another chance to sell his ancestral home. Only, he drives a hard bargain: Natasha must pose naked, for his eyes only…!

He's asking Natasha to take him on trust. But she's learned the hard way not to trust men—particularly those she's working with…and let alone men she's taking her clothes off for!

Darius's next outrageous statement? "I will, too—if it will make it easier for you.…"