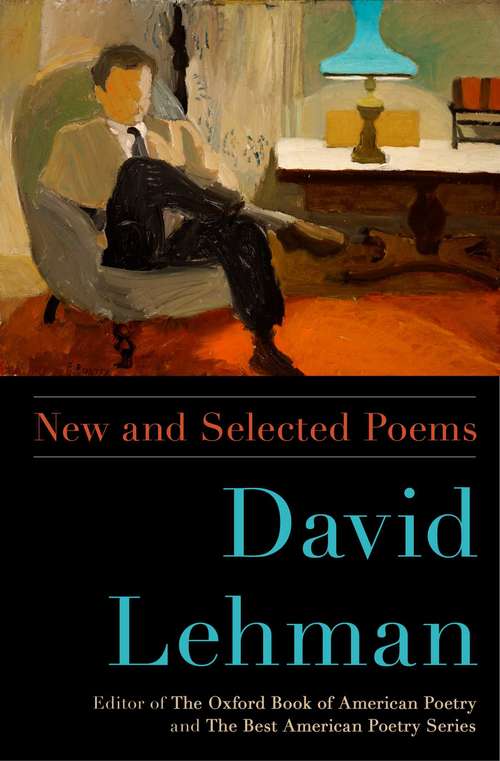 A major collection of poems from one of our most accomplished poets, the prominent man of letters behind The Best American Poetry series.Drawing from a wealth of material produced over the course of more than forty years, David Lehman's New and Selected Poems displays the remarkable range of his poetic genius. From the beginning Lehman has combined the traditional with the experimental, intellect with passion, creating a singular body of work in a manner all his own. Beginning with a selection of compelling new poems that feature the poet's customary wit and ingenuity and add a layer of surprise and suspense, the book follows with carefully selected pieces from Lehman's seven full-length books of poetry since 1986: Yeshiva Boys (2009), When a Woman Loves a Man (2005), The Evening Sun (2002), The Daily Mirror: A Journal in Poetry (2000), Valentine Place (1996), Operation Memory (1990), and An Alternative to Speech (1986). A group of uncollected works, including hard-to find early poems from the late 1960s and 1970s, rounds out the volume. These are poems that captivate as they stimulate thought, poems that capture the romance, irony, and pathos of love, and poems that are lyrical and lovely in unexpected, sometimes even comic ways. A master of his craft, Lehman is as fluent in the prose poem as in the sonnet, the sestina, the villanelle, and verse forms of his own invention. He departs from autobiography not only in fictional forays but in poems that ponder the lives of World Historical Individuals (Napoleon, Wittgenstein, Freud), the persistence of ancient myths in modern life, the mysteries of love and desire, and his own heritage as the son of Holocaust refugees. Lehman's poems are dazzling in their evocation of the recent past. As Mary Jo Bang has written, "the whole of a world is here, and the remnants of an era--from Dinah Shore to Bob Dylan, from Hitler to Nixon." This is as inspiring and thought-provoking and beautiful a book as any David Lehman has written.