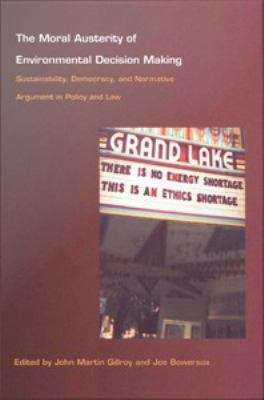 In The Moral Austerity of Environmental Decision Making a group of prominent environmental ethicists, policy analysts, political theorists, and legal experts challenges the dominating influence of market principles and assumptions on the formulation of environmental policy. Emphasizing the concept of sustainability and the centrality of moral deliberation to democracy, they examine the possibilities for a wider variety of moral principles to play an active role in defining "good" environmental decisions. If environmental policy is to be responsible to humanity and to nature in the twenty-first century, they argue, it is imperative that the discourse acknowledge and integrate additional normative assumptions and principles other than those endorsed by the market paradigm. The contributors search for these assumptions and principles in short arguments and debates over the role of science, social justice, instrumental value, and intrinsic value in contemporary environmental policy. In their discussion of moral alternatives to enrich environmental decision making and in their search for a less austere and more robust role for normative discourse in practical policy making, they analyze a series of original case studies that deal with environmental sustainability and natural resources policy including pollution, land use, environmental law, globalism, and public lands. The unique structure of the book--which features the core contributors responding in a discourse format to the central chapters' essays and debates--helps to highlight the role personal and public values play in democratic decision making generally and in the field of environmental politics specifically. Contributors. Joe Bowersox, David Brower, Susan Buck, Celia Campbell-Mohn, John Martin Gillroy, Joel Kassiola, Jan Laitos, William Lowry, Bryan Norton, Robert Paehlke, Barry G. Rabe, Mark Sagoff, Anna K. Schwab, Bob Pepperman Taylor, Jonathan Wiener