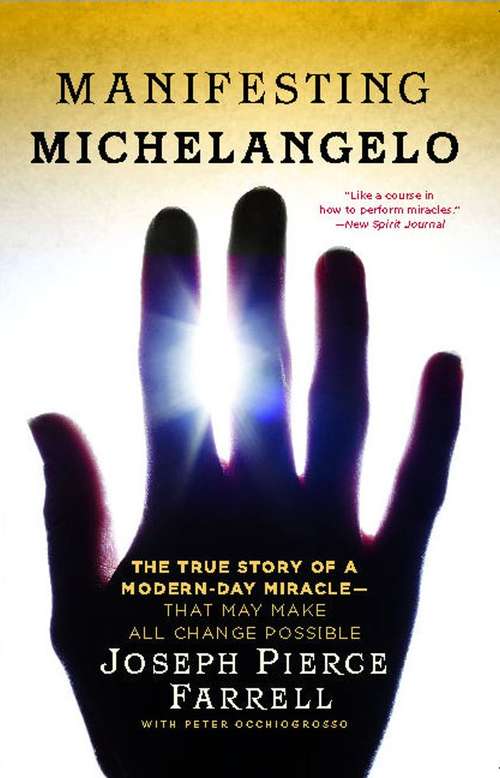 "And then it happened ... a ray of illumination shot straight up and down to the left and the right, forming a pair of axes. My heart began to beat very fast, yet I didn't blink. I couldn't have taken my eyes off what I was seeing if I had wanted to." At the dawn of the new millennium, Joseph Pierce Farrell made a startling discovery that holds the potential to transform the world. Having abandoned his childhood dream of a career in healthcare, he had settled for a passionless job in real estate, lining his pockets while eroding his soul. Then one day he fell into a humble job restoring antiques and furniture. One evening while working in his basement studio, he drifted into a meditative state and permitted his mind to soar with the unlimited imagination of a child. In that moment, he experienced a brilliant, blinding flash that ignited within him a remarkable power. Since that transformative moment, he has restored the facial features of a severely disfigured young man, virtually erased an inoperable brain tumor, dramatically reversed the aging process of the faces of celebrities, and mended broken bones--simply with intention supported by a profound connection to a higher source. After a decade of his pioneering work exploring consciousness and its relationship to health and healing, Farrell was invited to present his findings internationally in academic settings, catapulting him to the cutting edge of the integrative healthcare movement. Endorsed by leading researchers and medical doctors, Farrell's body of evidence has begun to construct a bridge to permit science and spirituality to heal their divide and advance the emerging integrative healthcare model. In this unprecedented book, Farrell chronicles his journey of discovery and poignant stories of human transformation. He outlines an easy-to-follow five-step process that readers can use to ignite their own capacity to manifest change in their lives and the world. Heralding a message of unlimited possibility, Manifesting Michelangelo makes a compelling argument, supporting what science is beginning to embrace, what the great artists have always known, and what spiritual traditions have long promised--that we possess a latent capacity to manifest on the level of the miraculous. It is the first book that asks us to believe--based not on faith alone, but on eyewitness medical testimony, scientific evidence, and profound photos--that we have the capacity to manifest the change in the world that our conscience decrees and our hearts desire.