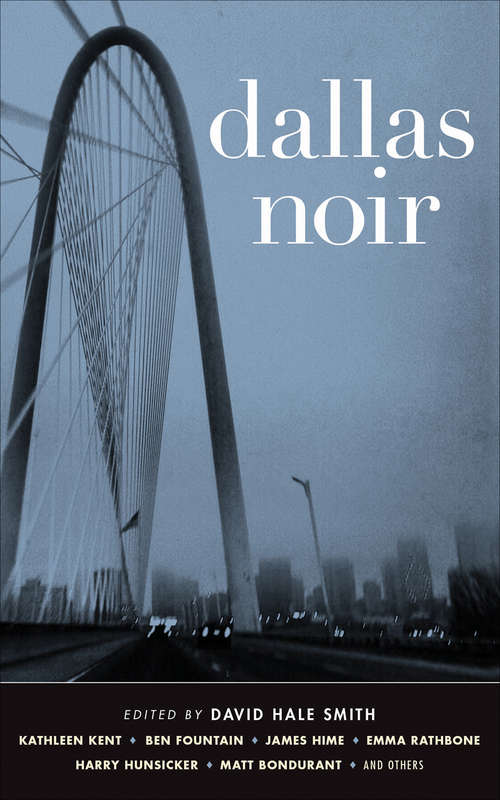 One of Texas Monthly's "5 Things You'll be Talking about in November""All in all, the stories in Dallas Noir have an unsettling, slightly creepy presence that is not just appropriate but completely necessary for a collection of noir fiction. If you think Dallas is boring or white-bread -- well, perhaps you haven't gotten out much and seen the dark edges of Big D for yourself. And if you haven't, maybe you don't even want to."--Dallas Morning News"If you want to delve into the creepier sides of Dallas, this is a good start."--Lakewood/East Dallas Advocate"Dallas Noir is a fiction mosaic, showing a city of class divisions precariously held together by money, land, and false love. It also shows the expanse of noir and it's power."--MysteryPeople.com (MysteryPeople Pick of the Month)"The latest entry in Akashic Books' award-winning noir anthology series doesn't disappoint, featuring a Texas-sized serving of writing's heavy hitters and satisfying short fiction."--Criminal Class Press"There are two reasons why you should buy Dallas Noir...Reason No. 1: you'll enjoy reading it. Reason No. 2: the publisher, Akashic Books, has published these noir series all over the country."--D Magazine/FrontBurner"November 22 looms, and as the watershed nears, a new anthology of short stories sets out with a noble purpose: to make Dallas known for something more than the place where President John F. Kennedy was assassinated."--Dallas Culture Map"Yet, Dallas' almost-fleeting presence, the glaring contrasts of the stinking rich and the hapless poor, its buxom women and its Texan masculinity teamed with Hispanic folklore, all find their way into each of these 16 short stories."--The Mercury (UTD Student Newspaper)"If we are going to commemorate the milestone anniversary of the worst crime ever committed in Big D, why not precede it with a few tales of bad luck, bad choices, and bad timing?"--M. Denise C."A great collection of brand new short stories."--Kick Ass Book ReviewsFeaturing brand-new stories by: Kathleen Kent, Ben Fountain, James Hime, Harry Hunsicker, Matt Bondurant, Merritt Tierce, Daniel J. Hale, Emma Rathbone, Jonathan Woods, Oscar C. Peña, Clay Reynolds, Lauren Davis, Fran Hillyer, Catherine Cuellar, David Haynes, and J. Suzanne Frank.From the introduction by David Hale Smith:My favorite line in my favorite song about Dallas goes like this: Dallas is a rich man with a death wish in his eyes / A steel and concrete soul in a warm heart and love disguise . . . The narrator of Jimmie Dale Gilmore's perfect tune "Dallas" is coming to town as a broke dreamer with the bright lights of the big city on his mind. He's just seen the Dallas cityscape through the window of his seat on a DC-9 at night. Is he just beginning his quest? Or is he on his way home, flying out of Love Field, reminiscing after seeing the woman who stepped on him when he was down?In a country with so many interesting cities, Dallas is often overlooked-except on November 22 every year. The heartbreaking anniversary keeps coming back around in a nightmare loop, for all of us. On that day in 1963, Dallas became American noir. A permanent black scar on its history that will never be erased, no matter how many happy business stories and hit television shows arise from here. In a stark ongoing counterweight to the JFK tragedy are those two iterations of the TV show. Dallas is not a TV show. It's a real city . . . For the past forty years, my capacity to be surprised by it has not diminished one bit. I hope the stories in this collection will surprise you too.