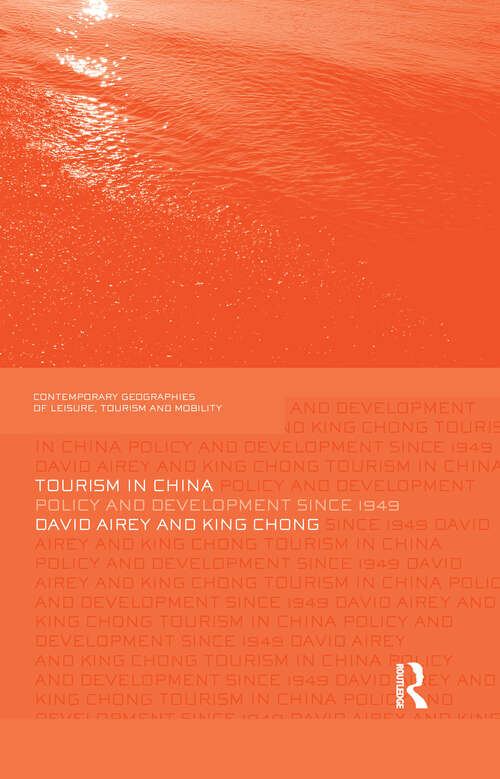 Tourism in China has grown rapidly since the country started implementing its open-door policy in 1978. Tourism development is now an essential agenda item for the Chinese government's plan for economic & social growth. Policy and policy-making for tourism therefore provides the essential background to understand tourism development in China.

This is the first book to set the development of tourism in China since 1949 in its policy context. Underpinned by a strong conceptual framework, this systematic study of China contributes to an in-depth understanding of how public policy-making for tourism works and how it affects the development of tourism in the real world. The text explores tourism policy during three distinct leadership periods since creation of the People’s Republic of China in 1949: Mao Zedong (1949-1978); Deng Xiaoping (1978-1997) and the Collective Leadership Era (1997-the present). The attitudes and values of leaders and central government agencies towards tourism are considered, as well as the interactions of ideological orthodoxies, socio-economic conditions and institutions in their influence on national policy-making and tourism development. A separate chapter is devoted to policy-making in China’s two Special Administrative Regions, Hong Kong and Macau, as well as Taiwan due to its political separation from the Mainland, and Tibet, given its distinctive characteristics. Drawing on China’s experience over sixty years the book concludes with both theoretical and practical implications for tourism policy-making.

This timely volume offers important insights into China’s Tourism as well as contributing to a wider pattern of debates about the respective roles of government policy and the market in the past and future. The material draws on exclusive in-depth interviews with key informants in China and on government documents and official sources not generally available in the international literature. This will be of interest to higher level students, academics & researchers within Tourism, Policy studies, Politics, Geography and China Studies.