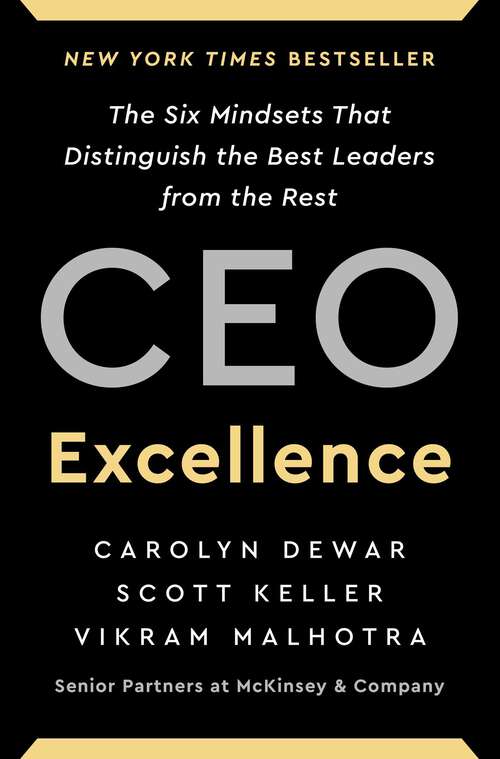 From the world&’s most influential management consulting firm, McKinsey & Company, an insight-packed, revelatory look at how the best CEOs do their jobs based on extensive interviews with today&’s most successful corporate leaders—including chiefs at Netflix, JPMorgan Chase, General Motors, and Sony. Being a CEO at any of the world&’s largest companies is among the most challenging roles in business. Billions, and even trillions, are at stake—and the fates of tens of thousands of employees often hang in the balance. Yet, even when &“can&’t miss&” high-achievers win the top job, very few excel. Thirty percent of Fortune 500 CEOs last fewer than three years, and two out of five new CEOs are perceived to be failing within eighteen months. For those who shoulder the burden of being the one on whom everyone counts, a manual for excellence is sorely needed. To identify the 21st century&’s best CEOs, the authors of CEO Excellence started with a pool of over 2400 public company CEOs. Extensive screening distilled that group into an elite corps, sixty-seven of whom agreed to in-depth, multi-hour interviews. Among those sharing their views: Jamie Dimon (JPMorgan Chase), Satya Nadella (Microsoft), Reed Hastings (Netflix), Kazuo Hirai (Sony), Ken Chenault (American Express), Mary Barra (GM), and Peter Brabeck-Letmathe (Nestlé). What came out of those frank, no-holds-barred conversations is a rich array of mindsets and actions that deliver outsized performance. Compelling, practical, and unprecedented in scope, CEO Excellence is a treasure trove of wisdom from today&’s most elite business leaders.