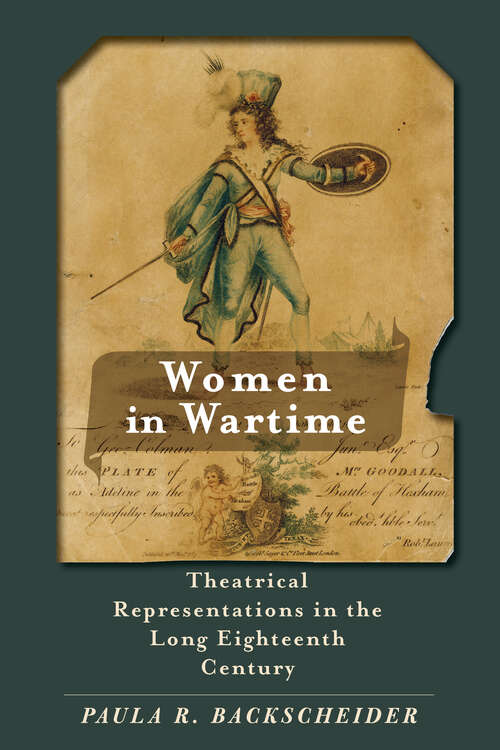 A revelatory history of the characters that playwrights and managers created out of the real lives of women in intimate relationships with military men to serve Great Britain's greatest needs during the war-saturated eighteenth century.During the long eighteenth century, Great Britain was almost continuously at war. As the era unfolded, the theatre gradually discovered the potential in having actresses, recently introduced to the stage in the 1660s, perform as wartime women characters. As playwrights and managers began casting women in transformative roles to meet each major national need, female characters came to be central figures in bringing the war home to the nation, transforming them into deeply patriotic British subjects.Paula Backscheider's Women in Wartime is the first study of theatrical representations of women with intimate connections to military men. Drawing upon her extensive expertise in gender, performance studies, popular culture, and archival studies, Backscheider traces the rise of the London theatre's acceptance that one of its responsibilities was to support its country's wars. Rather than focusing on the historical, mythical "warrior women" on the battlefield who have been much studied, Backscheider explores the lives and work of sweethearts, wives, mothers, sisters, barmaids, provision sellers, seaport prostitutes, and more, whose relationships to active-duty men made them recruits, volunteers, or even conscripts. They represent a distinct group of thousands of real women, and the actresses who portrayed them gave performances of change, struggle, celebration, mourning, survival, love, and patriotism. Backscheider explicates more than fifty plays—from main pieces, short farces, interludes, afterpieces, and comic operas to entr'actes, pantomimes, and even masques—as both entertainment and as ideological and propagandistic vehicles in times of severe crises. She also reveals how these works, many written by men with military experience, attest to the context of difficult, inescapable realities and momentous needs. Through the debunking of sexual stereotypes and attention to audience-pleasing roles such as impoverished-wife and breeches parts, Backscheider adds a dimension to theatrical history that substantially contributes to women's and military histories. Women in Wartime demonstrates the startling acuity and prescience of the repertoire in responding to the war-steeped culture of the period.