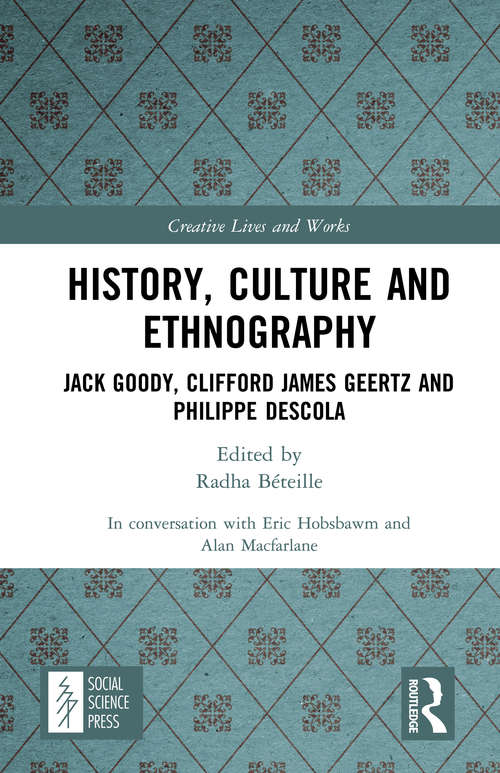 History, Culture and Ethnography: Jack Goody, Clifford Geertz and Philippe Descola is a collection of interviews that is being published as a book for the first time. These interviews have been conducted by one of England’s leading social anthropologists and historians, Professor Alan Macfarlane.

Filmed over a period of several years, the three conversations in this volume are part of the series Creative Lives and Works. These transcriptions form a part of a larger set of interviews that cut across various disciplines, from the social sciences and the sciences to the performing and visual arts. The current volume is on three of the world’s most eminent social and cultural anthropologists.  These conversations focus primarily on fieldwork experience in Ghana, Indonesia and Amazonia and how new dimensions and interpretations were added to the discipline of sociology and social anthropology. While Jack Goody and Clifford Geertz gave a new turn and depth to the disciple through their experiences in West Africa and Indonesia, Philippe Descola, who belongs to the succeeding generation of anthropologists, added human-nature interactions into the mix.

This book talks about both overcoming and understanding the importance of taking into account linguistic, historical, economic and cultural elements in the study of these societies through engaging conversations and occasional anecdotes. Immensely riveting as conversations, this collection gives one a flavour of the many different societies and cultures in far-flung reaches of the world encompassing several continents, often with no knowledge of each other’s existence, and a taste of how expansive the discipline of sociology and social anthropology are.

The book will be of enormous value not just to those interested in the fields of Sociology, Social Anthropology and Ethnography, but also those with an interest in History, Philosophy, Comparative Religion and Cultural Studies.

Please note: This title is co-published with Social Science Press, New Delhi. Taylor & Francis does not sell or distribute the Hardback in India, Pakistan, Nepal, Bhutan, Bangladesh and Sri Lanka.

Hakimiliki:
2022 Social Science Press. The right of Alan Macfarlane and Eric Hobsbawm to be identified as authors of this work has been asserted in accordance with sections