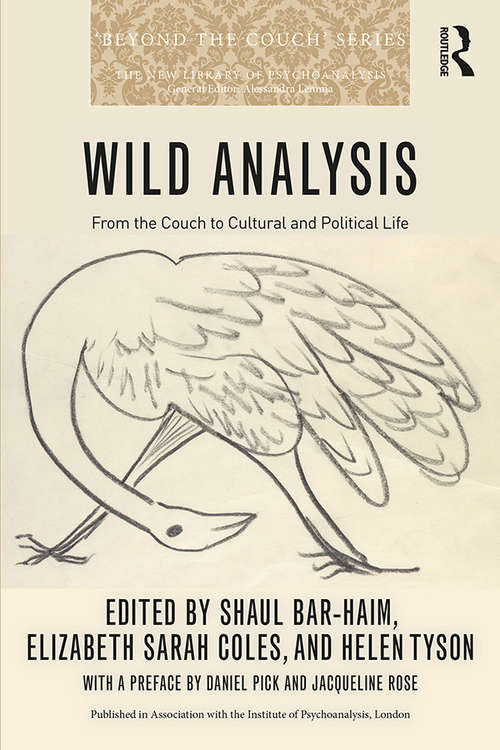 This book argues that the notion of ‘wild’ analysis, a term coined by Freud to denote the use of would-be psychoanalytic notions, diagnoses, and treatment by an individual who has not undergone psychoanalytic training, also provides us with a striking new way of exploring the limits of psychoanalysis.

Wild Analysis: From the Couch to Cultural and Political Life proposes to reopen the question of so-called ‘wild’ analysis by exploring psychoanalytic ideas at their limits, arguing from a diverse range of perspectives that the thinking produced at these limits – where psychoanalysis strays into other disciplines, and vice versa, as well as moments of impasse in its own theoretical canon – points toward new futures for both psychoanalysis and the humanities. The book’s twelve essays pursue fault lines, dissonances and new resonances in established psychoanalytic theory, often by moving its insights radically further afield. These essays take on sensitive and difficult topics in twentieth-century cultural and political life, including representations of illness, forced migration and the experiences of refugees, and questions of racial identity and identification in post-war and post-apartheid periods, as well as contemporary debates surrounding the Enlightenment and its modern invocations, the practice of critique and ‘paranoid’ reading. Others explore more acute cases of ‘wilding’, such as models of education and research informed by the insights of psychoanalysis, or instances where psychoanalysis strays into taboo political and cultural territory, as in Freud’s references to cannibalism.

This book will be of interest to researchers, practitioners, and students working across the fields of psychoanalysis, history, literature, culture and politics, and to anyone with an interest in the political import of psychoanalytic thought today.