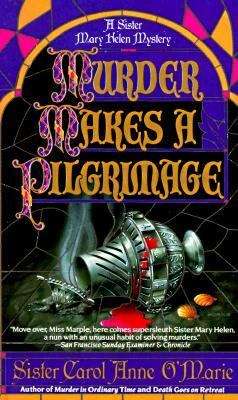 KILLING AT THE CRYPT

"Those damn old nuns again," grumbled San Francisco Police Commissioner Gallagher when he received a call with some astounding news. Sister Mary Helen and her friend Eileen, having won a rigged contest, had joined a ten-person tour to the shrine of St. lames in Santiago, Spain. And on the way the two good sisters had promptly run straight into a murder.

Sister Mary Helen found the body behind the saint's silver casket: a beautiful American woman strangled to death. Certain that one of her fellow pilgrims is the girl's killer, Sister Mary Helen begins to gather clues that will lead to a cold-blooded killer, or make a martyr of one very nosy nun....

Several more books in the Sister Mary Helen series are in the Bookshare collection featuring well plotted mysteries, word play, a look at the religious life and rye humor. Look for: 1 A Novena for Murder, 2 Advent of Dying, 3 The Missing Madonna, 4 Murder in Ordinary Time, 6 Death Goes on Retreat, 7 Death of an Angel and 8 Death Takes up a Collection with more on the way.