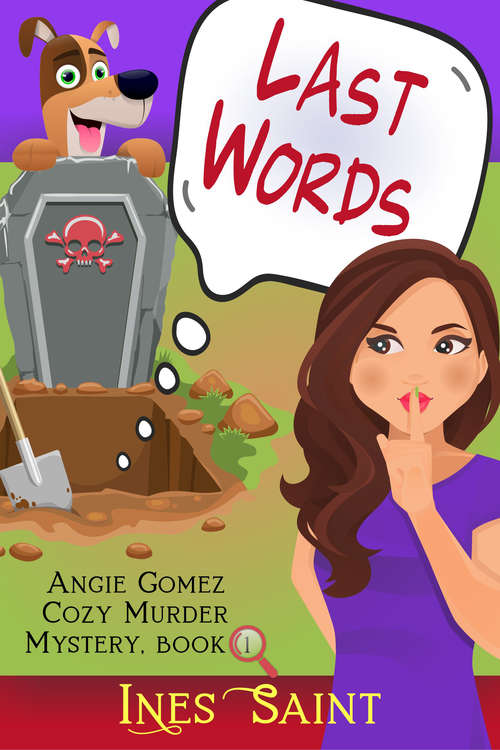 Murder Victims Are Telling Secrets in the Mortuary in Last Words, a Murder Mystery by Ines SaintDayton, Ohio – Present DayWhen fortune-teller, Abuela Luci, informs her granddaughter, Angie, that “Many changes are coming your way,” no one is more skeptical than Angie herself. Addicted to telenovelas and proud of her Puerto Rican roots, Angie Gomez Gomez lives alone with her dog, Tito Bendito. While she ekes out a living sculpting busts of prominent people she seldom admires, Angie’s true passion is solving the decade-old mystery of her parents’ murder.But when the town mayor, and former client, dies, the family asks Angie to do the post-mortem makeup. With the support of Pappa, the funeral director, and his grandson, Anthony, Angie commences her work in the depths of the mortuary, where she’s startled to discover that she can hear the echo of the dead person’s last thoughts, and the mayor’s last words were: “Bonnie is dead.”After a few false starts and misadventures, the three of them use Angie’s newfound ability to solve the mayor’s murder without revealing to the police how they got the information.The funeral home starts offering discounts to murder victims’ families just so Angie can hear their last words and solve their murders, while Angie hopes her new ability leads to her parents’ murderer. With the police growing suspicious, Angie herself may be the next victim as someone doesn’t want their secrets told.Publisher’s Note: Readers who enjoy cozy mysteries with a touch of humor, romance, and the paranormal will appreciate the Angie Gomez Murder Mystery series. Stories contain mild profanity and no explicit sex and can be enjoyed by readers 13 and up.“Abuela and her card reading...a delicious piece of the story.” ~Andra MaguranThe Angie Gomez Murder Mystery SeriesLast WordsWord Games(more to come)About the AuthorInes Saint was born in Zaragoza, Spain, and grew up with one foot on an island of Puerto Rico and the other in the States. She’s bilingual and bicultural and has spent the last eighteen years raising her fun, inspiring boys and sharing her life with her husband/best friend/biggest fan. Her greatest joys are spending quality time with family and close friends, traveling, reading feel-good historical fiction, hiking, and snuggling next to her dog, Hobbit.