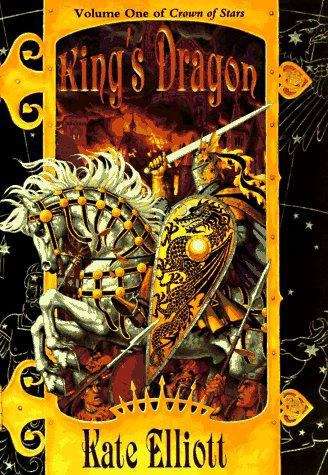 King's Dragon is a 530 page so-called epic fantasy novel written by the popular author Kate Elliott and first published in 1997. The work was a Nebula finalist for the best novel of the year. It is the first volume of an extensive series by Elliott entitled Crown of Stars. Remaining Books in series are in order: Prince of Dogs, The Burning Stone, Child of Flame, The Gathering Storm, In the Ruins, and Crown of Stars. DAW Books's summary of King's Dragon reads as follows:

From one of Fantasy's shining new lights comes this first volume in a magnificent epic set in a richly realized land and culture where bloody rebellion may soon destroy the kingdom, whilesorcerous confrontations and the secret workings of an otherworldly race could transform the very land into a place in which no mortal was ever meant to dwell.

It begins with the threat of civil war. For thoughKing Henry still holds the crown of Wendar,his reign has long been contested by his sister Sabella. There are many eager to flock toher banner, whether from their belief in hercause or the hope of personal gain. And there areways to bring others under her command,methods to make even the most unwilling lord into a weapon pointed at the very heart of Henry's realm.

Torn by internal strife, Wendar also facesdeadly raids from the north by an inhuman race,the Eika, and from the east by the "winged"riders, the Qumans. And terrifying portents arebeing seen by many; old ruins restored to lifeunder the light of the full moon and peopled by the long vanished Lost Ones; dark spirits walkingthe land in broad daylight.

And suddenly two innocents-Alain, a young manwho may find his future in a vision granted by the Lady of Battles, and Liath, a young woman withthe power to change the course of history if she can only learn to master her fear and seize what is rightfully hers-are about to be thrust into the midst of the conflict.