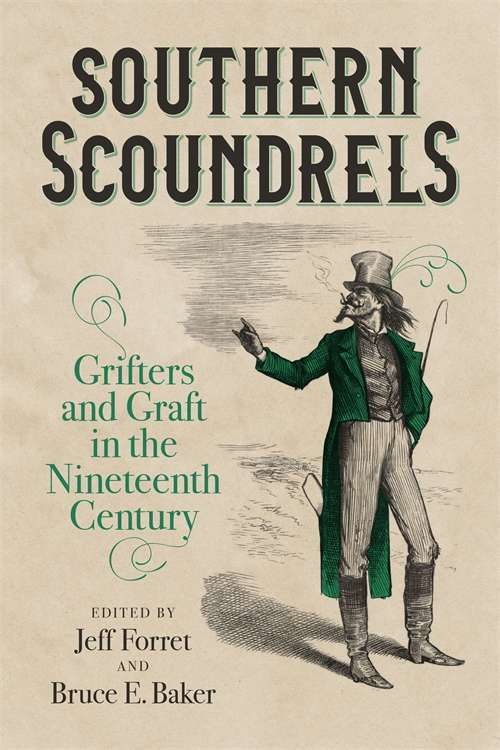 The history of capitalist development in the United States is long, uneven, and overwhelmingly focused on the North. Macroeconomic studies of the South have primarily emphasized the role of the cotton economy in global trading networks. Until now, few in-depth scholarly works have attempted to explain how capitalism in the South took root and functioned in all of its diverse—and duplicitous—forms. Southern Scoundrels explores the lesser-known aspects of the emergence of capitalism in the region: the shady and unscrupulous peddlers, preachers, slave traders, war profiteers, thieves, and marginal men who seized available opportunities to get ahead and, in doing so, left their mark on the southern economy. Eschewing conventional economic theory, this volume features narrative storytelling as engaging and seductive as the cast of shifty characters under examination. Contributors cover the chronological sweep of the nineteenth-century South, from the antebellum era through the tumultuous and chaotic Civil War years, and into Reconstruction and beyond. The geographic scope is equally broad, with essays encompassing the Chesapeake, South Carolina, the Lower Mississippi Valley, Texas, Missouri, and Appalachia. These essays offer a series of social histories on the nineteenth-century southern economy and the changes wrought by capitalist transformation. Tracing that story through the kinds of oily individuals who made it happen, Southern Scoundrels provides fascinating insights into the region’s hucksters and its history.ContentsIntroduction, Jeff Forret and Bruce E. Baker“Preachers and Peddlers: Credit and Belief in the Flush Times,” John Lindbeck “A Gentleman and a Scoundrel? Alexander McDonald, Financial Reputation, and Slavery’s Capitalism,” Alexandra J. Finley “‘How Deeply They Weed into the Pockets’: Slave Traders, Bank Speculators, and the Anatomy of a Chesapeake Wildcat, 1840–1843,” Jeff Forret “Bernard Kendig: Orchestrating Fraud in the Market and the Courtroom,” Maria R. Montalvo “William A. Britton v. Benjamin F. Butler: Occupied New Orleans, Confiscation, and the Disruption of the Cotton Trade in Wartime Natchez,” Jeff Strickland“Devils at the Doorstep: Confederate Judges, Masters of Sequestration,” Rodney J. Steward “‘Irresistibly Impelled toward Illegal Appropriation’: The Civil War Schemes of William G. Cheeney,” Jimmy L. Bryan, Jr. “Das Kapital on Tchoupitoulas Street: The Marketing of Stolen Goods and the Reserve Army of Labor in Reconstruction-Era New Orleans,” Bruce E. Baker “The Violent Lives of William Faucett,” Elaine S. Frantz “Eureka! Law and Order for Sale in Gilded Age Appalachia,” T. R. C. Hutton