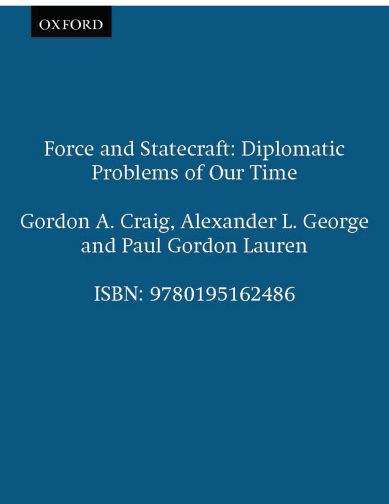 Part One focuses upon the historical context of force and statecraft. Following a completely new Introduction, it ranges from a substantially restructured discussion of the early techniques, instruments, and ideas of diplomacy to the profoundly dangerous changes brought about by contemporary weapons of mass destruction and terrorism. Chapters cover the emergence of the Great Powers, the classical system of diplomacy, the diplomatic revolution, the creation of the United Nations, the rise and fall of the Cold War, globalization and the consequences of the Internet, and events as recent as 9/11, the Bush Doctrine, the "war on terrorism" and the American-led war in Iraq, nuclear proliferation in Iran and North Korea, and the World Summit of global leaders. Significant new material is added to this edition on the critical subject of human rights and its relationship to international peace and security.

Part Two begins with the completely new and pivotal chapter on the subject of "Lessons of History and Knowledge for Statecraft." Each subsequent chapter then proceeds to systematically examine an especially important and challenging subject in diplomacy by means of delineating its theoretical principles and then analyzing three very specific historical cases in equal detail. The first of these always is drawn from the classical system of the nineteenth century, and the other two follow in a progression toward increasingly more recent events in contemporary international affairs. Particular care has been taken in this edition to include a number of new cases that reveal the truly

global dimensions of these diplomatic challenges and thus range from Europe and the United States to the Middle East and Asia.

Part Three opens with an entirely new chapter entitled "Ethics and Other Restraints on Force and Statecraft." This explores practical, structural, and political restraints upon policy makers; the debate over the nature of ethics and international politics; ethical restraints in foreign policy; and the difficult matter of observing ethical restraints, such as those of just war tradition, in warfare itself. A completely rewritten and updated Conclusion brings the major themes of the book together and offers a number of reflections about history, theory, the diplomatic revolution, and challenges ahead.