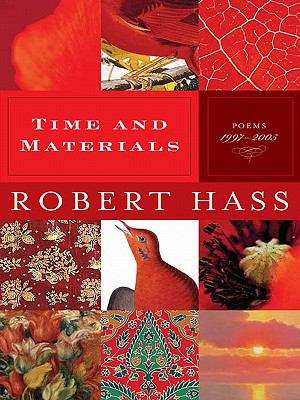 The poems in Robert Hass's new collection-his first to appear in a decade-are grounded in the beauty and energy of the physical world, and in the bafflement of the present moment in American culture. This work is breathtakingly immediate, stylistically varied, redemptive, and wise.

His familiar landscapes are here—San Francisco, the Northern California coast, the Sierra high country—in addition to some of his oft-explored themes: art; the natural world; the nature of desire; the violence of history; the power and limits of language; and, as in his other books, domestic life and the conversation between men and women. New themes emerge as well, perhaps: the essence of memory and of time.

The works here look at paintings, at Gerhard Richter as well as Vermeer, and pay tribute to his particular literary masters, friend Czeslaw Milosz, the great Swedish poet Tomas Tranströmer, Horace, Whitman, Stevens, Nietszche, and Lucretius. We are offered glimpses of a surpris­ingly green and vibrant twenty-first-century Berlin; of the demilitarized zone between the Koreas; of a Bangkok night, a Mexican desert, and an early summer morning in Paris, all brought into a vivid present and with a passionate meditation on what it is and has been to be alive. "It has always been Mr. Hass's aim," the New York Times Book Review wrote, "to get the whole man, head and heart and hands and every­thing else, into his poetry."

Winner of the 2007 National Book Award for Poetry, and the 2008 Pulitzer Prize for Poetry.