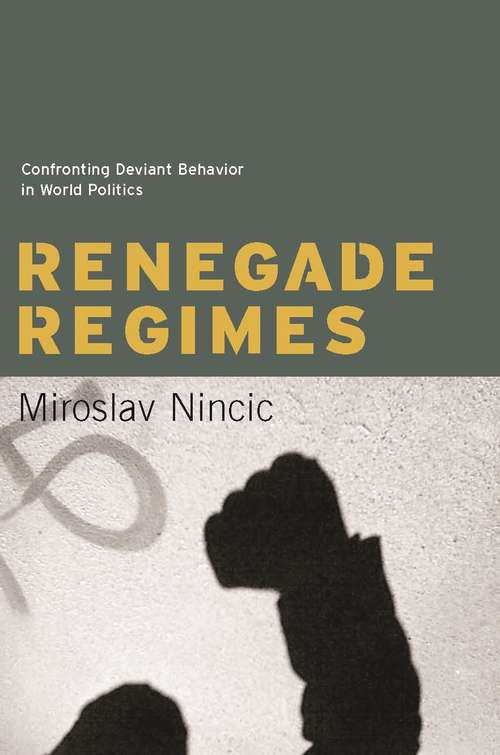 Rogue states pursue weapons of mass destruction, support terrorism, violate human rights, engage in acts of territorial aggression, and pose a threat to the international community. Recent debates and policy shifts regarding Iraq, North Korea, Syria, Iran, and Afghanistan reflect the uneven attempts to contend with regimes that pursue deviant behavior. In this timely new work, Miroslav Nincic illuminates the complex issues and policy choices surrounding clashes between international society and states that challenge the majority's espoused interests and values. As conventional approaches to international relations lose their relevance in a changing world, Nincic's work provides new and necessary frameworks and perspectives.Nincic explores recent events and develops theoretical models of contemporary asymmetrical power relations among states to offer a systematic account of the genesis, trajectory, and motivations of renegade regimes. He discusses how the pursuit of policies that defy international norms is often motivated by a regime's desire for greater domestic control. From this starting point, Nincic considers states' deviant behavior through two stages: the first is the initial decision to defy key aspects of the international normative order, and the second is the manner in which subsequent behavior is shaped by the international community's responses.In addressing attempts to control pariah states, Nincic assesses the effectiveness of sanctions and military responses. He provocatively argues that comprehensive economic sanctions can lead to a restructuring of the renegade regime's ideology and economy that ultimately strengthens its grip on power. In his chapter on military intervention, Nincic argues that force or the threat of force against a rogue state frequently triggers a protective reflex among its citizens, inspiring them to rally around the government's goals and values. Military threats, Nincic concludes, produce several kinds of consequences and their impact needs to be better understood.