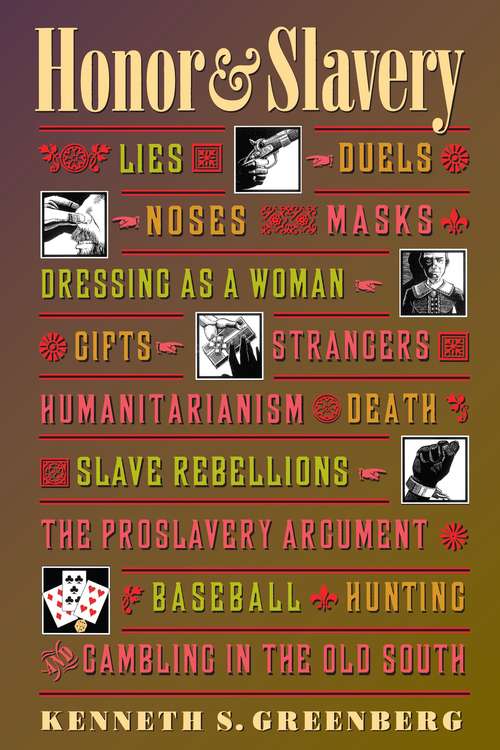 The "honorable men" who ruled the Old South had a language all their own, one comprised of many apparently outlandish features yet revealing much about the lives of masters and the nature of slavery. When we examine Jefferson Davis's explanation as to why he was wearing women's clothing when caught by Union soldiers, or when we consider the story of Virginian statesman John Randolph, who stood on his doorstep declaring to an unwanted dinner guest that he was "not at home," we see that conveying empirical truths was not the goal of their speech. Kenneth Greenberg so skillfully demonstrates, the language of honor embraced a complex system of phrases, gestures, and behaviors that centered on deep-rooted values: asserting authority and maintaining respect. How these values were encoded in such acts as nose-pulling, outright lying, dueling, and gift-giving is a matter that Greenberg takes up in a fascinating and original way. The author looks at a range of situations when the words and gestures of honor came into play, and he re-creates the contexts and associations that once made them comprehensible. We understand, for example, the insult a navy lieutenant leveled at President Andrew Jackson when he pulls his nose, once we understand how a gentleman valued his face, especially his nose, as the symbol of his public image. Greenberg probes the lieutenant's motivations by explaining what it meant to perceive oneself as dishonored and how such a perception seemed comparable to being treated as a slave. When John Randolph lavished gifts on his friends and enemies as he calmly faced the prospect of death in a duel with Secretary of State Henry Clay, his generosity had a paternalistic meaning echoed by the master-slave relationship and reflected in the pro-slavery argument. These acts, together with the way a gentleman chose to lend money, drink with strangers, go hunting, and die, all formed a language of control, a vision of what it meant to live as a courageous free man. In reconstructing the language of honor in the Old South, Greenberg reconstructs the world.