The Crosslinguistic Study of Language Acquisition 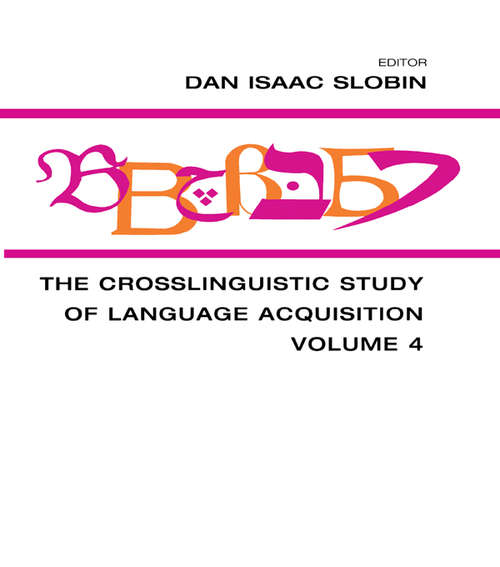 Continuing the tradition of this series, which has become a standard reference work in language acquisition, Volume 4 contains chapters on three additional languages/language groups--Finnish, Greek, and Korean. The chapters are selective, critical reviews rather than exhaustive summaries of the course of development of each language. Authors approach the language in question as a case study in a potential crosslinguistic typology of acquisitional problems, considering those data which contribute to issues of general theoretical concern in developmental psycholinguistics and linguistic theory. Each chapter, therefore, provides the following: * Grammatical Sketch of Language. Brief grammatical sketch of the language or language group, presenting those linguistic facts which are relevant to the developmental analysis. * Sources of Evidence. Summary of basic sources of evidence, characterizing methods of gathering data, and listing key references. * Overall Course of Development. Brief summary of the overall course of development in the language or language group, giving an idea of the general problems posed to the child in acquiring a language of this type, summarizing typical errors, domains of relatively error-free acquisition, and the timing of acquisition--areas of the grammar that show relatively precocious or delayed development in crosslinguistic perspective. * Data. Specific developmental aspects of the language examined in depth, depending on each individual language and available acquisition data. * Conclusions. An interpretive summary of theoretical points raised above, attending to general principles of language development and linguistic organization suggested by the study of a language of this type, plus comparisons with development of other languages.