Barry Trotter and the Unnecessary Sequel 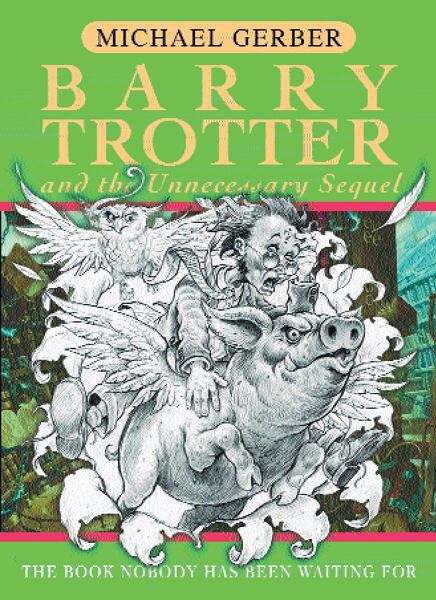 Like a chronic skin condition, the world's most irritating wizard is back! Barry Trotter, now 38 (going on 11), has returned to the Hogwash School for Wizardry and Witchcrap. He and his wife, Ermine Cringer, are there to deposit their Muddle-loving son Nigel, 11 (going on 38), and about as magical as a spork. Just as Barry and Ermine are set to leave, Headmister Dorco Malfeasance dies. Who did it? Who cares  nobody much liked Dorco anyway. Barry and Ermine are installed as interim heads of the School, and kick off a carnival of arrested development. But then, in the sort of plot twist that could only happen in a cheap novel designed to leech off a massive pop culture phenomenon, Barry develops youthenasia. He begins a steady march backwards in age and reliving the horrors of adolescence (including the Acne of Fire) may not be the end of it ...Suddenly, solving the mystery becomes a matter of Life and Death. Do they suspect Snipe, as usual, only to find out Lord Valumart's behind it? Everyone's a suspect  which means all your favorite characters are back for another round of abuse. Barry, Ermine, and the dog-brained manchild Lon Measly must find the murderer ... or fill at least 336 pages trying! Witty. Cultured. Erudite. Thought-Provoking. Brilliant. None of these describe Michael Gerber. Nevertheless, his first book, Barry Trotter and the Unauthorized Parody, sold shedloads, thanks to a raft of specious and irresponsible claims made by the Publisher. And while we have been instructed by the court to tell you that this sequel will NOT regrow your hair, let you earn thousands a week working from home, or free up $28 million 'trapped in Nigeria', it WILL increase the size of your penis 1-3 inches even if you don't have one to begin with! (Whether this is a good thing or not, we'll leave up to you.) While we're waiting for the inevitable legal action, we might as well tell you that Mr. Gerber lives in Chicago with his wife and three cats. Hobbies include solitaire, hypochrondria, and sleeping.