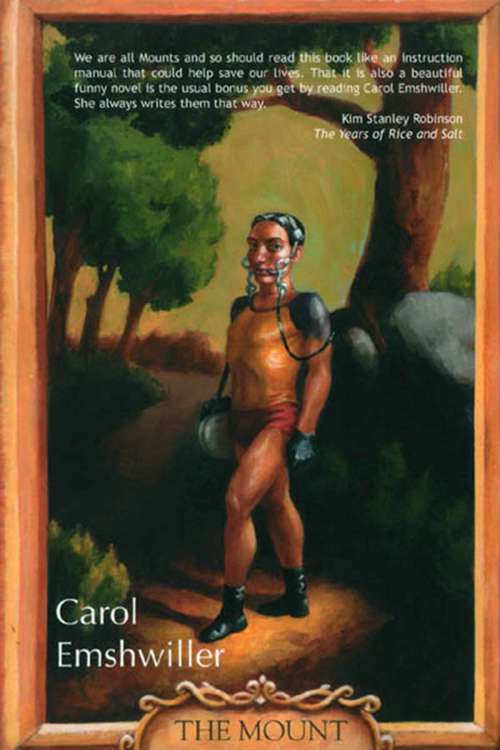 The Mount is a 230 page science Fiction novel written by Carol Emshwiller, winner of many awards, and first published in 2002. In this complex, experimental, and symbolic coming-of-age work, Emshwiller presents in a stream-of-consciousness style the thoughts and reflections of young Charley, one of the human riding mounts kept in stables by the aliens who conquered the earth hundreds of years earlier. He muses on his relationships with his owner and his mother, on his racing ambitions, and on the freedom that his father enjoys as one of the wild humans who live in the mountains. This novel was a finalist for the 2003 Nebula Award. In its preliminary pages, Small Beer Press features the following three rather revealing and certainly valid characterizations of The Mount written by distinguished authors:

I've been a fan of Carol Emshwiller's since the wonderful Carmen Dog. The Mount is a terrific novel, at once an adventure story and a meditation on the psychology of freedom and slavery. It's literally haunting (days after finishing it, I still think about all the terrible poetry of the Hoot/Sam relationship) and hypnotic. I'm honored to have gotten an early look at it.

This novel is like a tesseract, I started it and thought, ah, I see what she's doing. But then the dimensions unfolded and somehow it ended up being about so much more.

Carol Emshwiller's The Mount is a wicked book. Like Harlan Ellison's darkest visions, Emshwiller writes in a voice that reminds us of the golden season when speculative fiction was daring and unsettling. Dystopian, weird, comedic, and ultimately scary, The Mount takes us deep into another reality. Our world suddenly seems wrought with terrible ironies and a severe kind of beauty. When we are the mounts, who-or what-is riding us?