In Our Own Worlds #2 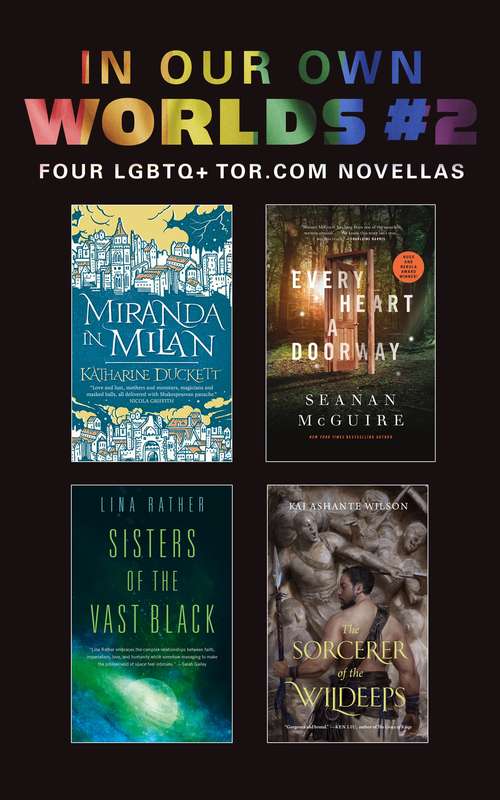 In celebration of Pride, Tor.com Publishing presents four critically acclaimed novellas featuring LGBTQ+ characters. With Miranda in Milan, debut author Katharine Duckett reimagines the consequences of Shakespeare’s The Tempest, casting Miranda into a Milanese pit of vipers and building a queer love story that lifts off the page in whirlwinds of feeling. After the tempest, after the reunion, after her father drowned his books, Miranda was meant to enter a brave new world. Naples awaited her, and Ferdinand, and a throne. Instead she finds herself in Milan, in her father’s castle, surrounded by hostile servants who treat her like a ghost. Whispers cling to her like spiderwebs, whispers that carry her dead mother’s name. And though he promised to give away his power, Milan is once again contorting around Prospero’s dark arts. With only Dorothea, her sole companion and confidant to aid her, Miranda must cut through the mystery and find the truth about her father, her mother, and herself.NPR calls Every Heart a Doorway "a mini-masterpiece of portal fantasy — a jewel of a book that deserves to be shelved with Lewis Carroll's and C. S. Lewis' classics". Hugo, Nebula, Locus, and Alex AWARD winner, World Fantasy and British Fantasy Award finalist, and Tiptree Honor List title.Eleanor West's Home for Wayward Children No Solicitations No Visitors No Quests Children have always disappeared under the right conditions; slipping through the shadows under a bed or at the back of a wardrobe, tumbling down rabbit holes and into old wells, and emerging somewhere... else. But magical lands have little need for used-up miracle children. Nancy tumbled once, but now she's back. The things she's experienced... they change a person. The children under Miss West's care understand all too well. And each of them is seeking a way back to their own fantasy world. But Nancy's arrival marks a change at the Home. There's a darkness just around each corner, and when tragedy strikes, it's up to Nancy and her new-found schoolmates to get to the heart of things. No matter the cost.The sisters of the Order of Saint Rita captain their living ship into the reaches of space in Lina Rather's debut novella, Sisters of the Vast Black. Years ago, Old Earth sent forth sisters and brothers into the vast dark of the prodigal colonies armed only with crucifixes and iron faith. Now, the sisters of the Order of Saint Rita are on an interstellar mission of mercy aboard Our Lady of Impossible Constellations, a living, breathing ship which seems determined to develop a will of its own. When the order receives a distress call from a newly-formed colony, the sisters discover that the bodies and souls in their care—and that of the galactic diaspora—are in danger. And not from void beyond, but from the nascent Central Governance and the Church itself.Sorcerer of the Wildeeps is the Crawford Award-winning novella that Wired listed as one of their twenty-five all-time favorite books. Critically acclaimed author Kai Ashante Wilson makes his commercial debut with this striking, wondrous tale of gods and mortals, magic and steel, and life and death that will reshape how you look at sword and sorcery. Since leaving his homeland, the earthbound demigod Demane has been labeled a sorcerer. With his ancestors' artifacts in hand, the Sorcerer follows the Captain, a beautiful man with song for a voice and hair that drinks the sunlight. The two of them are the descendants of the gods who abandoned the Earth for Heaven, and they will need all the gifts those divine ancestors left to them to keep their caravan brothers alive. The one safe road between the northern oasis and southern kingdom is stalked by a necromantic terror. Demane may have to master his wild powers and trade humanity for godhood if he is to keep his brothers and his beloved captain alive.At the Publisher's request, this title is being sold without Digital Rights Management Software (DRM) applied.