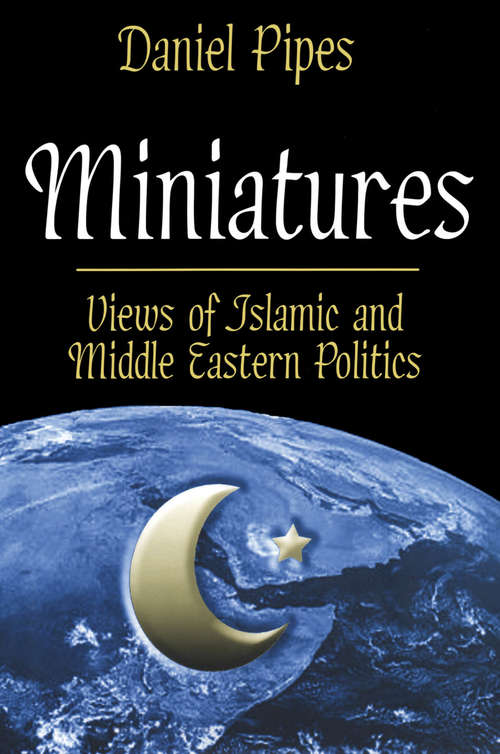 The volatility of Muslim and Middle Eastern politics has made these interrelated topics an overriding preoccupation of world and especially U.S. politics. Perhaps no region of the world has ever so dominated the American public discourse as the Middle East does today. As Daniel Pipes shows, this results mainly, but not exclusively, from the attacks of September 11, 2001 and the ensuing war on terrorism. Other sources of trouble include militant Islam, Muslims in the West, the Arab-Israeli conflict, the Iraq situation, relations with Saudi Arabia, the price of oil and gas, and U.S. policy toward all these issues. These are the central themes of the roughly one hundred essays in Daniel Pipes' Miniatures: Views of Islamic and Middle Eastern Politics.As Pipes notes, the Islamist war against America preceded the events of 9/11. Nevertheless, response to the earlier attacks had been inconsistent and somewhat nonchalant. Pipes shows how the State Department's annual report on Patterns of Global Terrorism veers into unreliability and even falsehood. He explains the problem in George W. Bush trying to decide what is true Islam and what not, in U.S. academics hiding the true meaning of the word "jihad," and in seventh-grade textbooks proselytizing for Islam. Pipes demonstrates that many seemingly devout Islamists are in fact impious frauds. When it comes to the Arab-Israeli conflict, Pipes indicates how the failure of the Oslo process could be discerned as early as 1994 and he shows how Yasir Arafat speaks one way to Arabs and another way to Israelis.This important collection, by one of the foremost experts in the field, presents original insights, accessibly written for Middle East specialists, political scientists, policymakers, journalists, and the interested public.