Aspects of the Secular Cantata in Late Baroque Italy 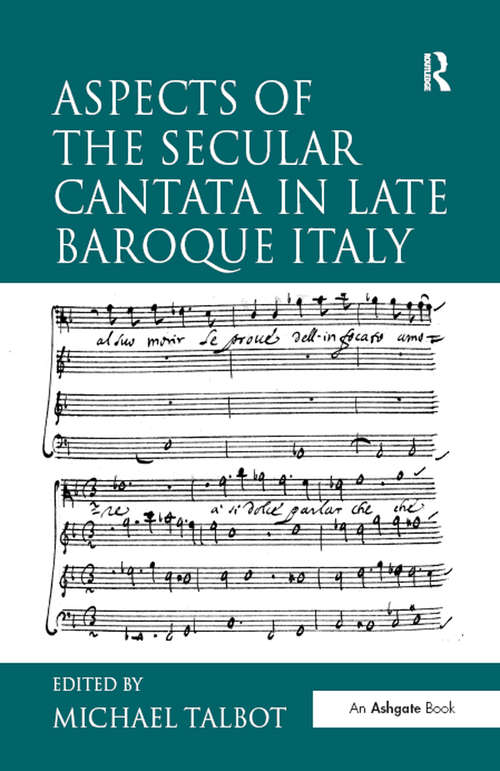 As shown by the ever-increasing volume of recordings, editions and performances of the vast repertory of secular cantatas for solo voice produced, primarily in Italy, in the second half of the seventeenth century and the first half of the eighteenth century, this long neglected genre has at last 'come of age'. However, scholarly interest is currently lagging behind musical practice: incredibly, there has been no general study of the Baroque cantata since Eugen Schmitz's handbook of 1914, and although many academic theses have examined microscopically the cantatas of individual composers, there has been little opportunity to view these against the broader canvas of the genre as a whole. The contributors in this volume choose aspects of the cantata relevant to their special interests in order to say new things about the works, whether historical, analytical, bibliographical, discographical or performance-based. The prime focus is on Italian-born composers working between 1650 and 1750 (thus not Handel), but the opportunity is also taken in one chapter (by Graham Sadler) to compare the French cantata tradition with its Italian parent in association with a startling new claim regarding the intended instrumentation. Many key figures are considered, among them Tomaso Albinoni, Giovanni Bononcini, Giovanni Legrenzi, Benedetto Marcello, Alessandro Scarlatti, Alessandro Stradella, Leonardo Vinci and Antonio Vivaldi. The poetic texts of the cantatas, all too often treated as being of little intrinsic interest, are given their due weight. Space is also found for discussions of the history of Baroque solo cantatas on disc and of the realization of the continuo in cantata arias - a topic more complex and contentious than may at first be apparent. The book aims to stimulate interest in, and to win converts to, this genre, which in its day equalled the instrumental sonata in importance, and in which more than a few composers invested a major part of their creativity.