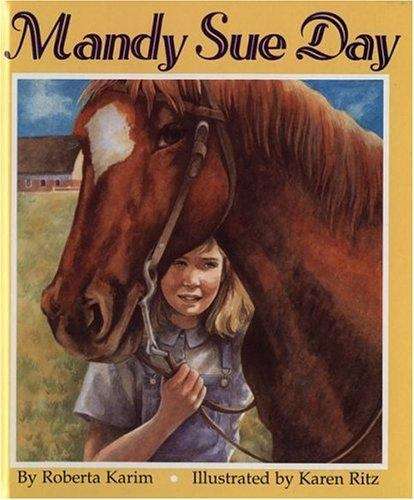 The harvest is in, and the Indian summer air is crisp and clear. As a reward for hard work, Papa and Mama are giving each of their children a whole day free from chores to spend any way they want.

This perfect day is Mandy Sue's very own to spend with her best friend: her horse Ben.

Together they drink in the sounds, tastes, smells, and feel of autumn as they trot through the cool woods and gallop across the plain. And when they get home, there's a mouth-watering treat-Mama's freshly baked donuts.

Mandy Sue Day, with Roberta Karim's sprightly, poetic language, complemented by Karen Ritz's vivid illustrations, tells of a blind girl's love for her horse and the exuberance and closeness that only two can share.

When Roberta Karim was six, she won a pony. On carefree afternoons she brushed, rode, and napped on her pony (and later her horse). On not-so-carefree Saturdays she cleaned out the stable. Recalling that time, Ms. Karim realized that her memories were based not just on seeing, but on the sounds, smells, tastes, and feel of a day spent with her horse. From that idea came the inspiration for Mandy Sue Day.

Roberta Karim earned her B.A. from Ohio Wesleyan University and her M.A. from Purdue University. She lives in Bay Village, Ohio, with her husband and two young sons.

Karen Ritz earned a degree in children's literature and illustration from the University of Minnesota. She has illustrated over twenty children's books, including Earthquake in the Third Grade by Laurie Myers. Ms. Ritz lives in St. Paul, Minnesota.