Call Them by Their True Names 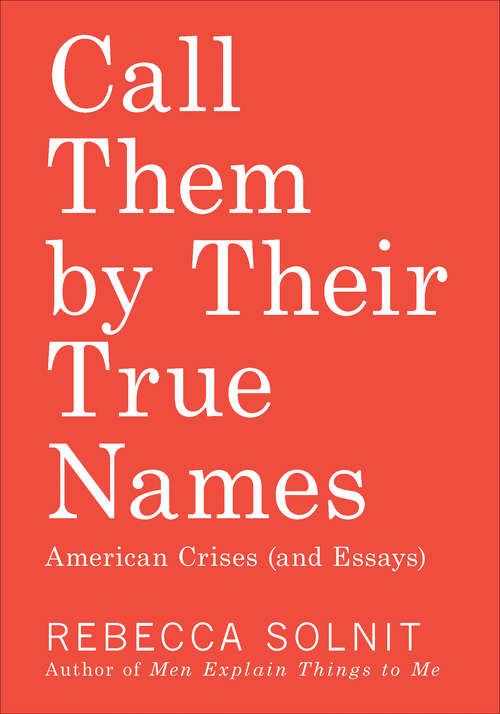 &“[A] call to arms that takes on a range of social and political problems in America—from racism and misogyny to climate change and Donald Trump&” (Poets & Writers).  National Book Award LonglistWinner of the Kirkus Prize for NonfictionWinner of the Foreword INDIE Editor&’s Choice Prize for Nonfiction   Rebecca Solnit is the author of more than twenty books, including the international bestseller Men Explain Things to Me. Called &“the voice of the resistance&” by the New York Times, she has emerged as an essential guide to our times, through incisive commentary on feminism, violence, ecology, hope, and everything in between.   In this powerful and wide-ranging collection of essays, Solnit turns her attention to the war at home. This is a war, she says, &“with so many casualties that we should call it by its true name, this war with so many dead by police, by violent ex-husbands and partners and lovers, by people pursuing power and profit at the point of a gun or just shooting first and figuring out who they hit later.&” To get to the root of these American crises, she contends that &“to acknowledge this state of war is to admit the need for peace,&” countering the despair of our age with a dose of solidarity, creativity, and hope.   &“Solnit&’s exquisite essays move between the political and the personal, the intellectual and the earthy.&” —Elle   &“Solnit is careful with her words (she always is) but never so much that she mutes the infuriated spirit that drives these essays.&” —Kirkus Reviews (starred review)   &“Solnit [is] a powerful cultural critic: as always, she opts for measured assessment and pragmatism over hype and hysteria.&” —Publishers Weekly   &“Essential reading for anyone living in America today.&” —The Brooklyn Rail