In the Shadow of the Oval Office 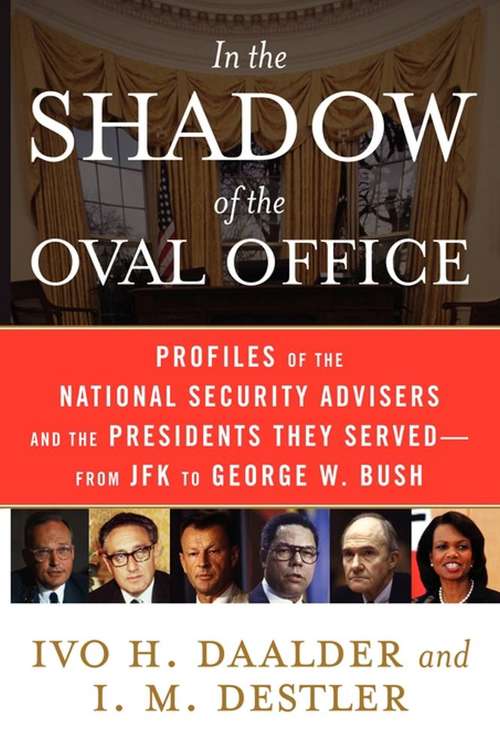 The most solemn obligation of any president is to safeguard the nation's security. But the president cannot do this alone. He needs help. In the past half century, presidents have relied on their national security advisers to provide that help. Who are these people, the powerful officials who operate in the shadow of the Oval Office, often out of public view and accountable only to the presidents who put them there? Some remain obscure even to this day. But quite a number have names that resonate far beyond the foreign policy elite: McGeorge Bundy, Henry Kissinger, Zbigniew Brzezinski, Colin Powell, Condoleezza Rice. Ivo Daalder and Mac Destler provide the first inside look at how presidents from John F. Kennedy to George W. Bush have used their national security advisers to manage America's engagements with the outside world. They paint vivid portraits of the fourteen men and one woman who have occupied the coveted office in the West Wing, detailing their very different personalities, their relations with their presidents, and their policy successes and failures. It all started with Kennedy and Bundy, the brilliant young Harvard dean who became the nation's first modern national security adviser. While Bundy served Kennedy well, he had difficulty with his successor. Lyndon Johnson needed reassurance more than advice, and Bundy wasn't always willing to give him that. Thus the basic lesson -- the president sets the tone and his aides must respond to that reality. The man who learned the lesson best was someone who operated mainly in the shadows. Brent Scowcroft was the only adviser to serve two presidents, Gerald Ford and George H. W. Bush. Learning from others' failures, he found the winning formula: gain the trust of colleagues, build a collaborative policy process, and stay close to the president. This formula became the gold standard -- all four national security advisers who came after him aspired to be "like Brent." The next president and national security adviser can learn not only from success, but also from failure. Rice stayed close to George W. Bush -- closer perhaps than any adviser before or since. But her closeness did not translate into running an effective policy process, as the disastrous decision to invade Iraq without a plan underscored. It would take years, and another national security aide, to persuade Bush that his Iraq policy was failing and to engineer a policy review that produced the "surge." The national security adviser has one tough job. There are ways to do it well and ways to do it badly. Daalder and Destler provide plenty of examples of both. This book is a fascinating look at the personalities and processes that shape policy and an indispensable guide to those who want to understand how to operate successfully in the shadow of the Oval Office.