Infrastructure and the Architectures of Modernity in Ireland 1916-2016 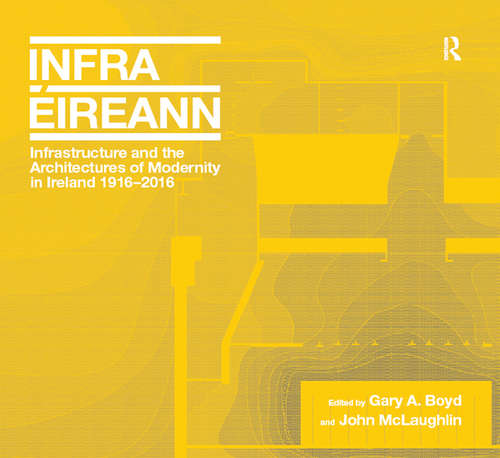 By: John McLaughlin • Gary A. Boyd
Ingia
Sign Up

At the formation of the new Republic of Ireland, the construction of new infrastructures was seen as an essential element in the building of the new nation, just as the adoption of international style modernism in architecture was perceived as a way to escape the colonial past. Accordingly, infrastructure became the physical manifestation, the concrete identity of these objectives and architecture formed an integral part of this narrative. Moving between scales and from artefact to context, Infrastructure and the Architectures of Modernity in Ireland 1916-2016 provides critical insights and narratives on what is a complex and hitherto overlooked landscape, one which is often as much international as it is Irish. In doing so, it explores the interaction between the universalising and globalising tendencies of modernisation on one hand and the textures of local architectures on the other. The book shows how the nature of technology and infrastructure is inherently cosmopolitan. Beginning with the building of the heroic Shannon hydro-electric facility at Ardnacrusha by the German firm of Siemens-Schuckert in the first decade of independence, Ireland became a point of varying types of intersection between imported international expertise and local need. Meanwhile, at the other end of the century, by the year 2000, Ireland had become one of the most globalized countries in the world, site of the European headquarters of multinationals such as Google and Microsoft. Climatically and economically expedient to the storing and harvesting of data, Ireland has subsequently become a repository of digital information farmed in large, single-storey sheds absorbed into anonymous suburbs. In 2013, it became the preferred site for Intel to design and develop its new microprocessor chip: the Galileo. The story of the decades in between, of shifts made manifest in architecture and infrastructure from the policies of economic protectionism, to the opening up of the country to direct foreign investment and the embracing of the EU, is one of the influx of technologies and cultural references into a small country on the edges of Europe as Ireland became both a launch-pad and testing ground for a series of aspects of designed modernity.