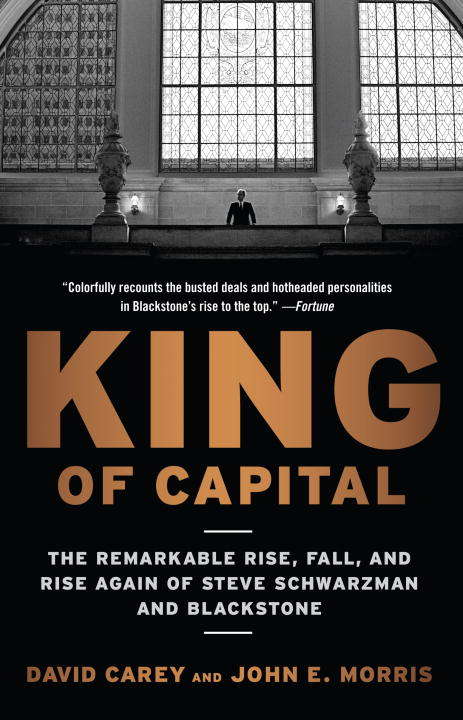 Strippers and Flippers . . . or a New Positive Force Helping to Drive the Economy . . . The untold story of Steve Schwarzman and Blackstone, the financier and his financial powerhouse that avoided the self-destructive tendencies of Wall Street. David Carey and John Morris show how Blackstone (and other private equity firms) transformed themselves from gamblers, hostile-takeover artists, and 'barbarians at the gate' into disciplined, risk-conscious investors. The financial establishment--banks and investment bankers such as Citigroup, Bear Stearns, Lehman, UBS, Goldman Sachs, Merrill Lynch, Morgan Stanley--were the cowboys, recklessly assuming risks, leveraging up to astronomical levels and driving the economy to the brink of disaster. Blackstone is now ready to break out once again since it is sitting on billions of dollars that can be invested at a time when the market is starved for capital. The story of a financial revolution--the greatest untold success story on Wall Street: Not only have Blackstone and a small coterie of competitors wrested control of corporations around the globe, but they have emerged as a major force on Wall Street, challenging the likes of Goldman Sachs and Morgan Stanley for dominance. Great human interest story: How Blackstone went from two guys and a secretary to being one of Wall Street's most powerful institutions, far outgrowing its much older rival KKR; and how Steve Schwarzman, with a pay packet one year of $398 million and $684 million from the Blackstone IPO, came to epitomize the spectacular new financial fortunes amassed in the 2000s. Controversial: Analyzes the controversies surrounding Blackstone and whether it and other private equity firms suck the lifeblood out of companies to enrich themselves--or whether they are a force that helps make the companies they own stronger and thereby better competitors. The story by two insiders with access: Insightful and hard-hitting, filled with never-before-revealed details about the workings of a heretofore secretive company that was the personal fiefdom of Schwarzman and Peter Peterson. Forward-looking: How Blackstone and private equity will drive the economy and provide a model for how financing will work.From the Hardcover edition.