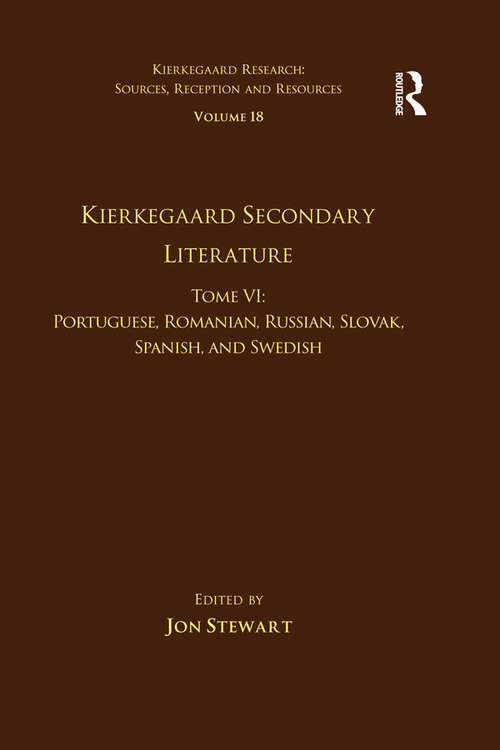 In recent years interest in the thought of Kierkegaard has grown dramatically, and with it the body of secondary literature has expanded so quickly that it has become impossible for even the most conscientious scholar to keep pace. The problem of the explosion of secondary literature is made more acute by the fact that much of what is written about Kierkegaard appears in languages that most Kierkegaard scholars do not know. Kierkegaard has become a global phenomenon, and new research traditions have emerged in different languages, countries, and regions.

The present volume is dedicated to trying to help to resolve these two problems in Kierkegaard studies. Its purpose is, first, to provide book reviews of some of the leading monographic studies in the Kierkegaard secondary literature so as to assist the community of scholars to become familiar with the works that they have not read for themselves. The aim is thus to offer students and scholars of Kierkegaard a comprehensive survey of works that have played a more or less significant role in the research. Second, the present volume also tries to make accessible many works in the Kierkegaard secondary literature that are written in different languages and thus to give a glimpse into various and lesser-known research traditions. The six tomes of the present volume present reviews of works written in Catalan, Chinese, Czech, Danish, Dutch, English, Finnish, French, Galician, German, Greek, Hebrew, Hungarian, Italian, Japanese, Norwegian, Polish, Portuguese, Romanian, Russian, Slovak, Spanish, and Swedish.