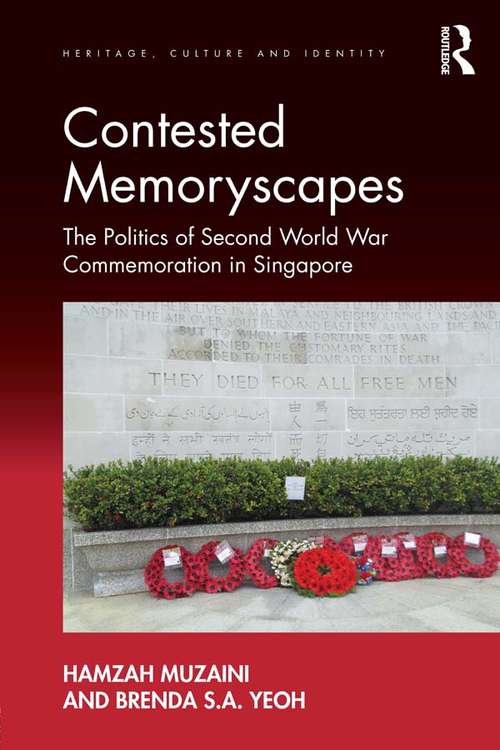 This book sets itself apart from much of the burgeoning literature on war commemoration within human geography and the social sciences more generally by analysing how the Second World War (1941–45) is remembered within Singapore, unique for its potential to shed light on the manifold politics associated with the commemoration of wars not only within an Asian, but also a multiracial and multi-religious postcolonial context. By adopting a historical materialist approach, it traces the genealogy of war commemoration in Singapore, from the initial disavowal of the war by the postcolonial government since independence in 1965 to it being embraced as part of national historiography in the early 1990s apparent in the emergence since then of various memoryscapes dedicated to the event. Also, through a critical analysis of a wide selection of these memoryscapes, the book interrogates how memories of the war have been spatially and discursively appropriated today by state (and non-state) agencies as a means of achieving multiple objectives, including (but not limited to) commemoration, tourism, mourning and nation-building. And finally, the book examines the perspectives of those who engage with or use these memoryscapes in order to reveal their contested nature as fractured by social divisions of race, gender, ideology and nationality.

The substantive book chapters will be based on archival and empirical data drawn from case studies in Singapore themed along different conceptual lenses including ethnicity; gender; postcoloniality, tourism and postmodernity; personal mourning; transnational remembrances and politics; and the preservation of original sites, stories and artefacts of war.

Collectively, they speak to and work towards shedding insights to the one overarching question: 'How is the Second World War commemorated in postcolonial Singapore and what are some of the issues, politics and contestations which have accompanied these efforts to presence the war today, particularly as they are spatially and materially played out via different types of memoryscapes?' The book also distinguishes itself from previous works written on war commemoration in Singapore, mainly by social and military historians, particularly through its adoption of a geographical agenda that gives attention to issues of politics of space as it relates to remembrance and representations of memory.