The Book of General Ignorance 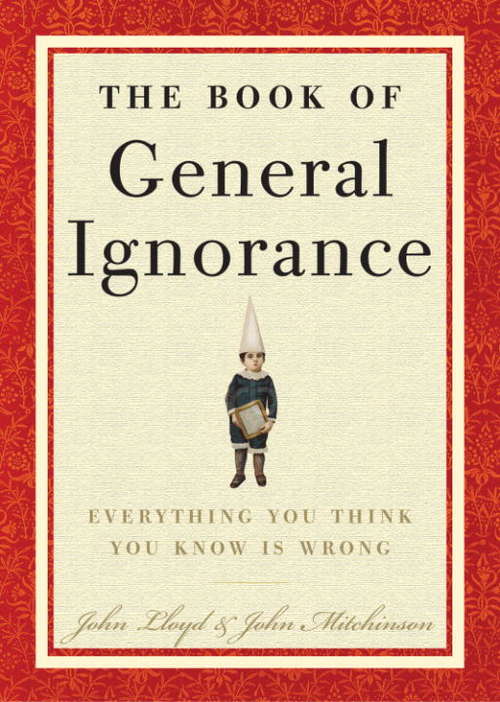 Think Magellan was the first man to circumnavigate the globe, baseball was invented in America, Henry VIII had six wives, Mount Everest is the tallest mountain? Wrong, wrong, wrong, and wrong again.Misconceptions, misunderstandings, and flawed facts finally get the heave-ho in this humorous, downright humiliating book of reeducation based on the phenomenal British bestseller. Challenging what most of us assume to be verifiable truths in areas like history, literature, science, nature, and more, The Book of General Ignorance is a witty "gotcha" compendium of how little we actually know about anything. It'll have you scratching your head wondering why we even bother to go to school.Revealing the truth behind all the things we think we know but don't, this book leaves you dumbfounded about all the misinformation you've managed to collect during your life, and sets you up to win big should you ever be a contestant on Jeopardy! or Who Wants to Be a Millionaire.Besides righting the record on common (but wrong) myths like Captain Cook discovering Australia or Alexander Graham Bell inventing the telephone, The Book of General Ignorance also gives us the skinny on silly slipups to trot out at dinner parties (Cinderella wore fur, not glass, slippers and chicken tikka masala was invented in Scotland, not India).Thomas Edison said that we know less than one millionth of one percent about anything: this book makes us wonder if we know even that much.You'll be surprised at how much you don't know! Check out THE BOOK OF GENERAL IGNORANCE for more fun entries and complete answers to the following: How long can a chicken live without its head?About two years. What do chameleons do? They don't change color to match the background. Never have; never will. Complete myth. Utter fabrication. Total Lie. They change color as a result of different emotional states. Who invented champagne? Not the French. How many legs does a centipede have?Not a hundred. How many toes has a two-toed sloth? It's either six or eight. How many penises does a European earwig have? a)Fourteenb)None at allc)Two (one for special occasions)d)Mind your own businessWhich animals are the best-endowed of all?Barnacles. These unassuming modest beasts have the longest penis relative to their size of any creature. They can be seven times longer than their body. What is a rhino's horn made from? A rhinoceros horn is not, as some people think, made out of hair. Who was the first American president?Peyton Randolph. What were George Washington's false teeth made from? Mostly hippopotamus. What was James Bond's favorite drink? Not the vodka martini.From the Hardcover edition.