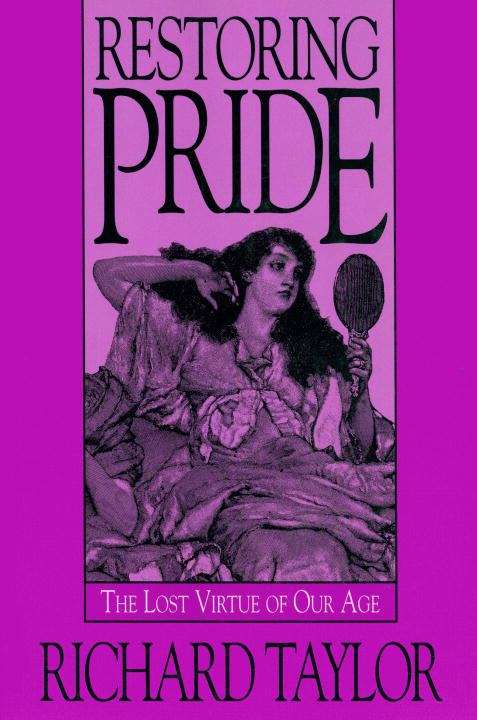 The ideas put forth in Restoring Pride will seem, to many readers, elitist. That's because they are. Richard Taylor rejects the popular notion that all people are equal, embracing instead the idea that some people are simply better than others as human beings. Their superiority has nothing to do with class, power, or wealth; they are better because they are gifted and have made the most of their gifts. Taylor doesn't try to be politically correct and makes no apologies; he explains what it means to be more than normal and encourages people to fulfill their potential.

Pride, according to Taylor, is the justified love of oneself for having achieved personal excellence. People who use their natural gifts for significant and lasting achievements have the right to be proud of themselves. Furthermore, virtually everyone is in some way gifted. Some people hone their talents and better themselves while others follow paths that are easy, pleasant, common. People who fail to nourish and perfect their talents, who do only what is expected of them, are wasting their lives. We all have gifts and we need to identify them and excel in the areas in which we're gifted. Put another way, figure out what you're good at . . . and do it.

Superior people, people who are justifiably proud, are not concerned with what others think of them, but with how they measure up in their own eyes. They are their own most demanding judges. Although proud people set their own standards higher, and make their own rules stricter than those others might subject them to, there is a rule of conduct that must guide their relations with other people: be considerate. If they adhere to this maxim when dealing with friends or strangers, with great and powerful people or people unknown, they will need no other rule of right and wrong. Taylor's definition of pride leaves no room for conceit. Arrogance and self-centered behavior, he believes, have no place in the lives of the proud.