In Our Own Worlds 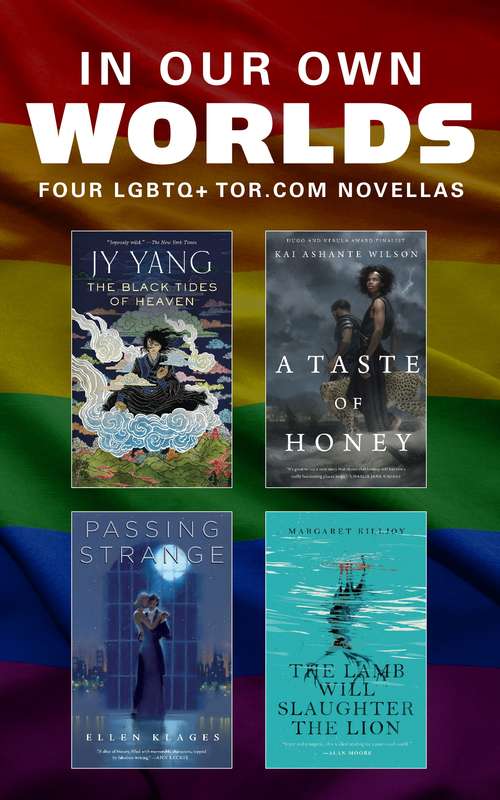 In celebration of Pride, Tor.com Publishing presents four critically acclaimed novellas featuring LGBTQ+ characters. In these stories you’ll find reflections of queer identity both as it exists in our world and in imagined worlds from queer authors, augmenting lived experiences with fantastical flourishes, magical monks, alternate realities, time travel, and demonic deer.The Black Tides of Heaven introduces JY Yang's Tensorate Series, a silkpunk world of magic, martial arts, imperial intrigue, and dinosaurs, which Kate Elliott calls "effortlessly fascinating" and The New York Times praises as "joyously wild." A finalist for the Hugo, Nebula, and Locus Awards for Best Novella.Mokoya and Akeha, the twin children of the Protector, were sold to the Grand Monastery as infants. While Mokoya developed her strange prophetic gift, Akeha was always the one who could see the strings that moved adults to action. While Mokoya received visions of what would be, Akeha realized what could be. What's more, they saw the sickness at the heart of their mother's Protectorate.A rebellion is growing. The Machinists discover new levers to move the world every day, while the Tensors fight to put them down and preserve the power of the state. Unwilling to continue as a pawn in their mother's twisted schemes, Akeha leaves the Tensorate behind and falls in with the rebels. But every step Akeha takes towards the Machinists is a step away from Mokoya. Can Akeha find peace without shattering the bond they share with their twin?A Taste of Honey by Kai Ashante Wilson is the Hugo, Nebula, World Fantasy, Theodore Sturgeon, and Locus finalist novella that N. K. Jemisin calls "a love story as painful as it is beautiful and complex". One of Book Riot's "Best Books We Read in November."Long after the Towers left the world but before the dragons came to Daluça, the emperor brought his delegation of gods and diplomats to Olorum. As the royalty negotiates over trade routes and public services, the divinity seeks arcane assistance among the local gods. Aqib bgm Sadiqi, fourth-cousin to the royal family and son of the Master of Beasts, has more mortal and pressing concerns. His heart has been captured for the first time by a handsome Daluçan soldier named Lucrio. In defiance of Saintly Canon, gossiping servants, and the furious disapproval of his father and brother, Aqib finds himself swept up in a whirlwind gay romance. But neither Aqib nor Lucrio know whether their love can survive all the hardships the world has to throw at them.The Lamb Will Slaughter the Lion by Margaret Killjoy pits utopian anarchists against rogue demon deer in this dropkick-in-the-mouth punk fantasy that Alan Moore calls "scary and energetic."Searching for clues about her best friend’s mysterious suicide, Danielle ventures to the squatter, utopian town of Freedom, Iowa, and witnesses a protector spirit — in the form of a blood-red, three-antlered deer — begin to turn on its summoners. She and her new friends have to act fast if they’re going to save the town — or get out alive.Inspired by the pulps, film noir, and screwball comedy, Passing Strange is a story as unusual and complex as San Francisco itself from World Fantasy Award winning author Ellen Klages, and a finalist for the 2017 Nebula Award for Best NovellaSan Francisco in 1940 is a haven for the unconventional. Tourists flock to the cities within the city: the Magic City of the World’s Fair on an island created of artifice and illusion; the forbidden city of Chinatown, a separate, alien world of exotic food and nightclubs that offer “authentic” experiences, straight from the pages of the pulps; and the twilight world of forbidden love, where outcasts from conventional society can meet.Six women find their lives as tangled with each other’s as they are with the city they call home. They discover love and danger on the borders where magic, science, and art intersect.At the Publisher's request, this title is being sold without Digital Rights Management Software (DRM) applied.