The Conservative Case for Trump 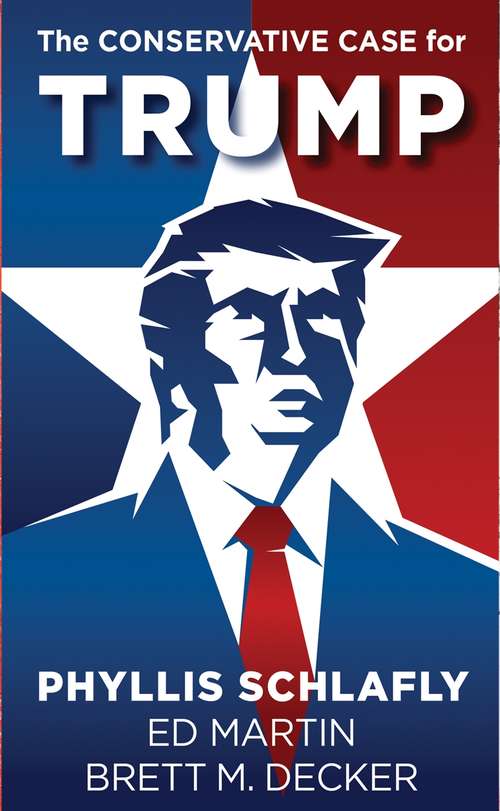 From Phyllis Schlafly, the woman whose celebrated classic A Choice Not An Echo (over 3 million copies sold) upended the 1964 Republican Convention, comes a persuasive new argument for a surprising conservative choice: Donald Trump.If you can’t stand Hillary Clinton, but wonder if you could vote for Donald Trump, you need to buy this book.In it, you’ll learn from conservative icon Phyllis Schlafly-lawyer, bestselling author, and "sweet- heart of the Silent Majority”-why Donald Trump is worthy of every conservative’s vote.Joined by Ed Martin, the former head of the Missouri Republican Party, and Brett Decker, formerly an editorial writer with the Wall Street Journal and the Washington Times, Schlafly presents the real Trump, the Trump she and her colleagues have met with and interviewed, the Trump who is far more conservative than you think.In The Conservative Case for Trump, Schlafly reveals:1. How Trump’s appointees to the Supreme Court (on which Schlafly advised him) could be the most consequential in a century2. How, unlike any other Republican, Trump could actually fix the nation’s immigration mess3. Why his economic platform could spark an economic revival on the scale of the Reagan boom of the 1980s (it is based on much the same plan)4. How Trump will defend the First Amendment-guaranteeing freedom of speech and religion-against an ever more dictatorial Left5. Why Trump’s fresh thinking on defense and foreign policy is long overdue-and could send terrorism into rapid retreatDonald Trump is the most controversial Republican presidential candidate since Barry Goldwater, and could be the most conservative and successful since Ronald Reagan. Phyllis Schlafly makes an irrefutable case that needs to be shared with every wavering voter. Nothing less than the future of our country is at stake. If you buy only one political book this year, it has to be The Conservative Case for Trump.