The Epochs of Nature 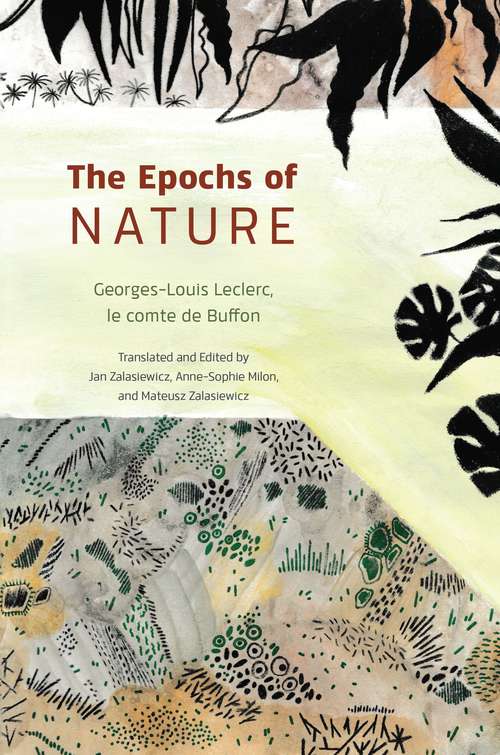 Georges-Louis Leclerc, le comte de Buffon's The Epochs of Nature, originally published as Les Époques de la Nature in 1778, is one of the first great popular science books, a work of style and insight that was devoured by Catherine the Great of Russia and influenced Humboldt, Darwin, Lyell, Vernadsky, and many other renowned scientists. It is the first geological history of the world, stretching from the Earth’s origins to its foreseen end, and though Buffon was limited by the scientific knowledge of his era—the substance of the Earth was not, as he asserts, dragged out of the sun by a giant comet, nor is the sun’s heat generated by tidal forces—many of his deductions appear today as startling insights. And yet, The Epochs of Nature has never before been available in its entirety in English—until now.

In seven epochs, Buffon reveals the main features of an evolving Earth, from its hard rock substrate to the sedimentary layers on top, from the minerals and fossils found within these layers to volcanoes, earthquakes, and rises and falls in sea level—and he even touches on age-old mysteries like why the sun shines. In one of many moments of striking scientific prescience, Buffon details evidence for species extinction a generation before Cuvier’s more famous assertion of the phenomenon. His seventh and final epoch does nothing less than offer the first geological glimpse of the idea that humans are altering the very foundations of the Earth—an idea of remarkable resonance as we debate the designation of another epoch: the Anthropocene. Also featuring Buffon’s extensive “Notes Justificatives,” in which he offers further evidence to support his assertions (and discusses vanished monstrous North American beasts—what we know as mastodons—as well as the potential existence of human giants), plus an enlightening introduction by editor and translator Jan Zalasiewicz and historians of science Sverker Sörlin, Libby Robin, and Jacques Grinevald, this extraordinary new translation revives Buffon’s quite literally groundbreaking work for a new age.

Hakimiliki:
2018 The University of Chicago Press