The Law and Society Reader 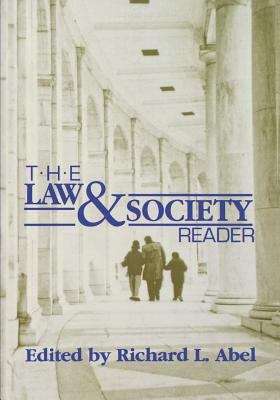 This book seeks to provide answers to everything you ever wanted to know about the law—except what the rules are or ought to be.

For centuries, the law has been considered a neutral, objective arena that sets societal standards and in which conflicting forces resolve disputes. More recently, however, the interaction between law and society has been recognized as a two-way street: society clearly exacts a considerable influence on the practice and evolution of law. Further, the discrepancy between what the law mandates and what the social reality is has served as evidence of the chasm between theory and practice, between the abstraction of law and its actual societal effects.

Examining such issues as the limits of legal change and the capacity of law to act as a revolutionary agent, the essays in this book offer a well-rounded introduction to the relationship between law and society. By focusing on flashpoint issues in legal studies—equality, consciousness and ideology, social control--and making ample use of engaging case studies, The Law and Society Review provides an invaluable resource for scholars and students alike.