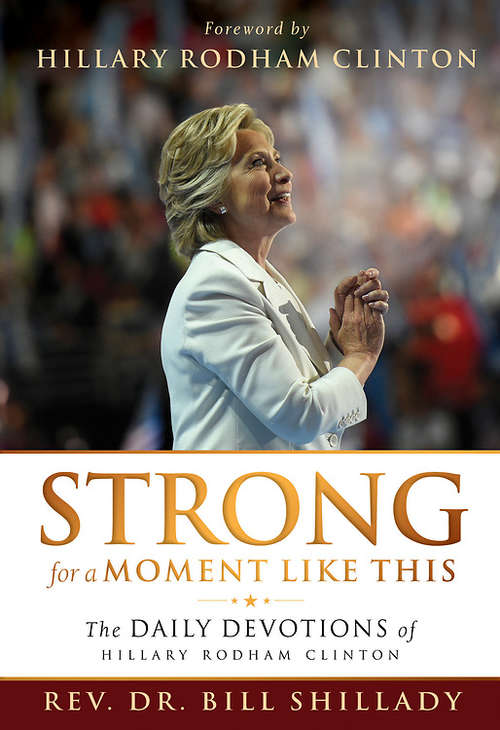 Few people know that during the 2016 presidential campaign, former Secretary of State Hillary Rodham Clinton received a devotion every day. Over the course of those 20 months, Rev. Dr. Bill Shillady—a pastoral friend of Clinton’s—and a small team of other pastors provided the Democratic nominee with spiritual support to stay strong through arguably one of the more contentious elections in American history.

Strong for a Moment Like This: The Daily Devotions of Hillary Rodham Clinton includes 365 of the more than 600 devotions written for Secretary Clinton, along with personal notes, portions of her speeches, and headlines that provide context for that day’s devotion. Clinton is writing the foreword, the first time post-election readers will have a chance to hear directly from her about her faith during that time.

The book will include:

-A foreword from Hillary Rodham Clinton

-Selected reflections on the writing by the author

-Additional material including a timeline of events, speech excerpts, press selections, and quotes

The book’s devotions are organized into 12 themes, such as Forgiveness, Doing Good, Courage, and Women. A portion of the proceeds from the book will go to the United Methodist City Society in New York.

As Secretary Clinton said in The New York Times (January 26, 2016), “My study of the Bible, my many conversations with people of faith, has led me to believe the most important commandment is to love the Lord with all your might and to love your neighbor as yourself. And that is what I think we are commanded by Christ to do. And there is so much more in the Bible about taking care of the poor, visiting the prisoners, taking in the stranger, creating opportunities for others to be lifted up, to find faith themselves that I think there are many different ways of exercising your faith.”

Strong for a Moment Like This gives readers an inside, personal look at the faith of one of our nation’s most lauded leaders.