Armies and Insurgencies in the Arab Spring 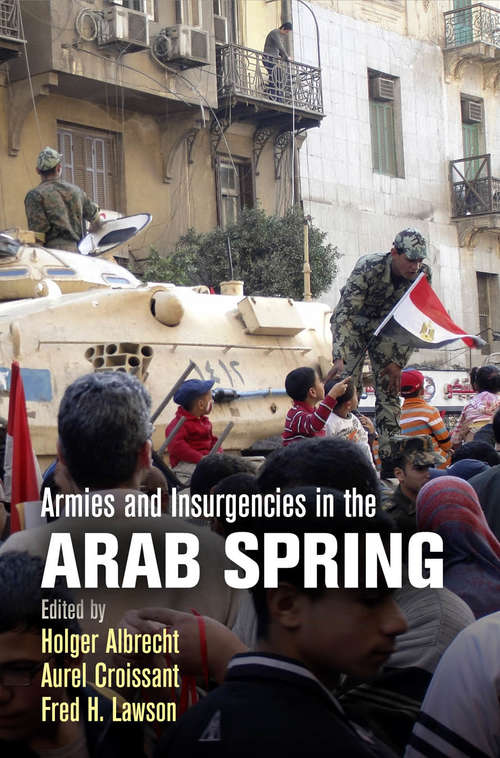 Following the popular uprisings that swept across the Arab world beginning in 2010, armed forces remained pivotal actors in politics throughout the region. As demonstrators started to challenge entrenched autocratic rulers in Tunis, Cairo, Sana'a, and Manama, the militaries stormed back into the limelight and largely determined whether any given ruler survived the protests. In Tunisia, Egypt, and Yemen, senior officers pulled away from their presidents, while in Algeria, Bahrain, and Syria, they did not. More important, military officers took command in shaping the new order and conflict trajectories throughout that region.Armies and Insurgencies in the Arab Spring explores the central problems surrounding the role of armed forces in the contemporary Arab world. How and why do military apparatuses actively intervene in politics? What explains the fact that in some countries, military officers and rank-and-file take steps to defend an incumbent, while in others they defect and refrain from suppressing popular protest? What are the institutional legacies of the military's engagement during, and in the immediate aftermath of, mass uprisings?Focusing on these questions, editors Holger Albrecht, Aurel Croissant, and Fred H. Lawson have organized Armies and Insurgencies in the Arab Spring into three sections. The first employs case studies to make comparisons within and between regions; the second examines military engagements in the Arab uprisings in Yemen, Bahrain, and Syria; and the third looks at political developments following the cresting of the protest wave in Egypt, Tunisia, Libya, and the Gulf. The collection promotes better understanding not only of the particular history of military engagement in the Arab Spring but also of significant aspects of the transformation of political-military relations in other regions of the contemporary world.Contributors: Holger Albrecht, Risa A. Brooks, Cherine Chams El-Dine, Virginie Collombier, Aurel Croissant, Philippe Droz-Vincent, Kevin Koehler, Fred H. Lawson, Shana Marshall, Dorothy Ohl, David Pion-Berlin, Tobias Selge, Robert Springborg.