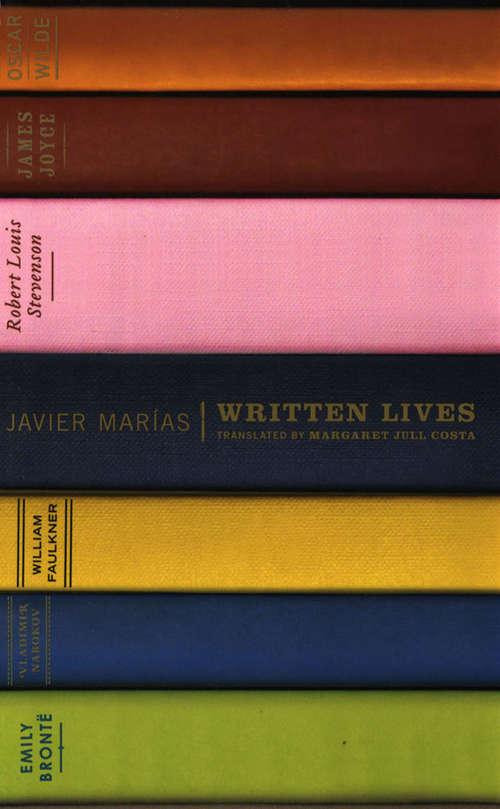 An affectionate and very funny gallery of twenty great world authors from the pen of "the most subtle and gifted writer in contemporary Spanish literature" (The Boston Globe).

In addition to his own busy career as "one of Europe's most intriguing contemporary writers" (TLS), Javier Marías is also the translator into Spanish of works by Hardy, Stevenson, Conrad, Faulkner, Nabokov, and Laurence Sterne. His love for these authors is the touchstone of Written Lives. Collected here are twenty pieces recounting great writers' lives, "or, more precisely, snippets of writers' lives." Thomas Mann, Rilke, Arthur Conan Doyle, Turgenev, Djuna Barnes, Emily Brontë, Malcolm Lowry, and Kipling appear ("all fairly disastrous individuals"), and "almost nothing" in his stories is invented.

Like Isak Dinesen (who "claimed to have poor sight, yet could spot a four-leaf clover in a field from a remarkable distance away"), Marías has a sharp eye. Nabokov is here, making "the highly improbable assertion that he is 'as American as April in Arizona,'" as is Oscar Wilde, who, in debt on his deathbed, ordered up champagne, "remarking cheerfully, 'I am dying beyond my means.'" Faulkner, we find, when fired from his post office job, explained that he was not prepared "to be beholden to any son-of-a-bitch who had two cents to buy a stamp." Affection glows in the pages of Written Lives, evidence, as Marías remarks, that "although I have enjoyed writing all my books, this was the one with which I had the most fun."