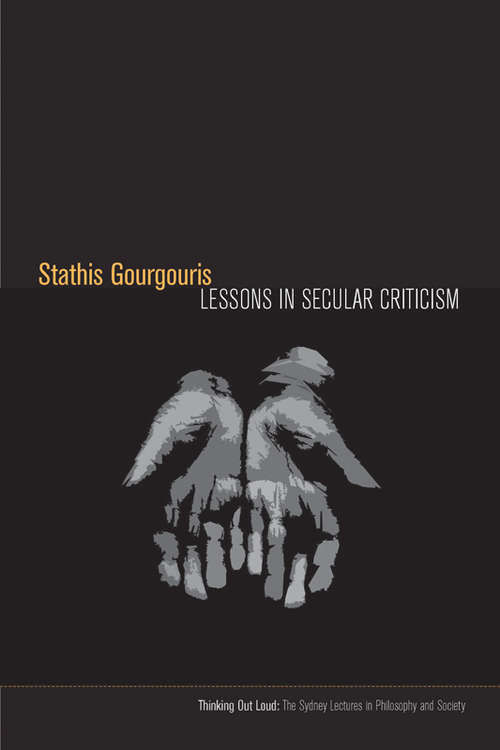 Secular criticism is a term invented by Edward Said to denote not a theory but a practice that counters the tendency of much modern thinking to reach for a transcendentalist comfort zone, the very space philosophy wrested away from religion in the name of modernity. Using this notion as a compass, this book reconfigures recent secularism debates on an entirely different basis, by showing (1) how the secular imagination is closely linked to society’s radical poiesis, its capacity to imagine and create unprecedented forms of worldly existence; and (2) how the space of the secular animates the desire for a radical democratic politics that overturns inherited modes of subjugation, whether religious or secularist.

Gourgouris’s point is to disrupt the co-dependent relation between the religious and the secular—hence, his rejection of fashionable languages of postsecularism—in order to engage in a double critique of heteronomous politics of all kinds. For him, secular criticism is a form of political being: critical, antifoundational, disobedient, anarchic, yet not negative for negation’s sake but creative of new forms of collective reflection, interrogation, and action that alter not only the current terrain of dominant politics but also the very self-conceptualization of what it means to be human.

Written in a free and combative style and given both to close readings of texts and to gazing off into the broad horizon, these essays cover a range of issues—historical and philosophical, archaic and contemporary, literary and political—that ultimately converge in the significance of contemporary radical politics: the assembly movements we have seen in various parts of the world in recent years. The secular imagination demands a radical pedagogy and unlearning a great many established thought patterns. Its most important dimension is not battling religion per se but dismantling theological politics of sovereignty in favor of radical conditions for social autonomy.