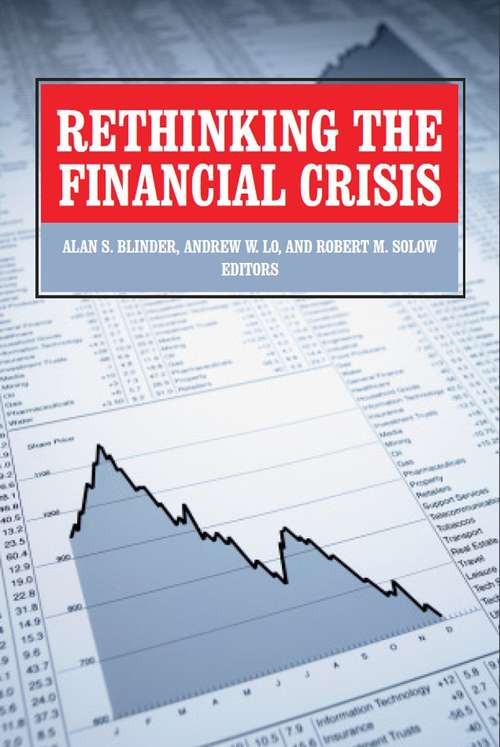 Some economic events are so major and unsettling that they “change everything.” Such is the case with the financial crisis that started in the summer of 2007 and is still a drag on the world economy. Yet enough time has now elapsed for economists to consider questions that run deeper than the usual focus on the immediate causes and consequences of the crisis. How have these stunning events changed our thinking about the role of the financial system in the economy, about the costs and benefits of financial innovation, about the efficiency of financial markets, and about the role the government should play in regulating finance? In Rethinking the Financial Crisis, some of the nation’s most renowned economists share their assessments of particular aspects of the crisis and reconsider the way we think about the financial system and its role in the economy.

In its wide-ranging inquiry into the financial crash, Rethinking the Financial Crisis marshals an impressive collection of rigorous and yet empirically-relevant research that, in some respects, upsets the conventional wisdom about the crisis and also opens up new areas for exploration. Two separate chapters–by Burton G. Malkiel and by Hersh Shefrin and Meir Statman – debate whether the facts of the financial crisis upend the efficient market hypothesis and require a more behavioral account of financial market performance. To build a better bridge between the study of finance and the “real” economy of production and employment, Simon Gilchrist and Egan Zakrasjek take an innovative measure of financial stress and embed it in a model of the U.S. economy to assess how disruptions in financial markets affect economic activity—and how the Federal Reserve might do monetary policy better. The volume also examines the crucial role of financial innovation in the evolution of the pre-crash financial system. Thomas Philippon documents the huge increase in the size of the financial services industry relative to real GDP, and also the increasing cost per financial transaction. He suggests that the finance industry of 1900 was just as able to produce loans, bonds, and stocks as its modern counterpart—and it did so more cheaply. Robert Jarrow looks in detail at some of the major types of exotic securities developed by financial engineers, such as collateralized debt obligations and credit-default swaps, reaching judgments on which make the real economy more efficient and which do not. The volume’s final section turns explicitly to regulatory matters. Robert Litan discusses the political economy of financial regulation before and after the crisis. He reviews the provisions of the Dodd-Frank Wall Street Reform and Consumer Protection Act of 2010, which he considers an imperfect but useful response to a major breakdown in market and regulatory discipline.

At a time when the financial sector continues to be a source of considerable controversy, Rethinking the Financial Crisis addresses important questions about the complex workings of American finance and shows how the study of economics needs to change to deepen our understanding of the indispensable but risky role that the financial system plays in modern economies.