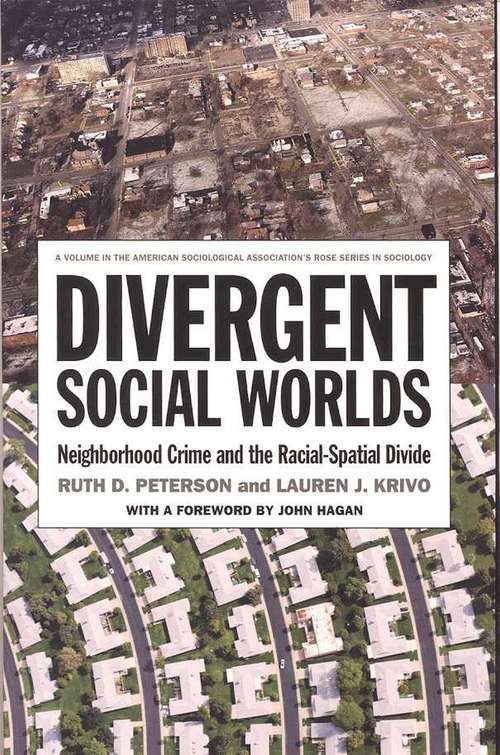 More than half a century after the first Jim Crow laws were dismantled, the majority of urban neighborhoods in the United States remain segregated by race. The degree of social and economic advantage or disadvantage that each community experiences--particularly its crime rate--is most often a reflection of which group is in the majority. As Ruth Peterson and Lauren Krivo note in Divergent Social Worlds, "Race, place, and crime are still inextricably linked in the minds of the public. " This book broadens the scope of single-city, black/white studies by using national data to compare local crime patterns in five racially distinct types of neighborhoods. Peterson and Krivo meticulously demonstrate how residential segregation creates and maintains inequality in neighborhood crime rates. Based on the authors' groundbreaking National Neighborhood Crime Study (NNCS), Divergent Social Worlds provides a more complete picture of the social conditions underlying neighborhood crime patterns than has ever before been drawn. The study includes economic, social, and local investment data for nearly nine thousand neighborhoods in eighty-seven cities, and the findings reveal a pattern across neighborhoods of racialized separation among unequal groups. Residential segregation reproduces existing privilege or disadvantage in neighborhoods--such as adequate or inadequate schools, political representation, and local business--increasing the potential for crime and instability in impoverished non-white areas yet providing few opportunities for residents to improve conditions or leave. And the numbers bear this out. Among urban residents, more than two-thirds of all whites, half of all African Americans, and one-third of Latinos live in segregated local neighborhoods. More than 90 percent of white neighborhoods have low poverty, but this is only true for one quarter of black, Latino, and minority areas. Of the five types of neighborhoods studied, African American communities experience violent crime on average at a rate five times that of their white counterparts, with violence rates for Latino, minority, and integrated neighborhoods falling between the two extremes. Divergent Social Worlds lays to rest the popular misconception that persistently high crime rates in impoverished, non-white neighborhoods are merely the result of individual pathologies or, worse, inherent group criminality. Yet Peterson and Krivo also show that the reality of crime inequality in urban neighborhoods is no less alarming. Separate, the book emphasizes, is inherently unequal. Divergent Social Worlds lays the groundwork for closing the gap--and for next steps among organizers, policymakers, and future researchers. A Volume in the American Sociological Association's Rose Series in Sociology