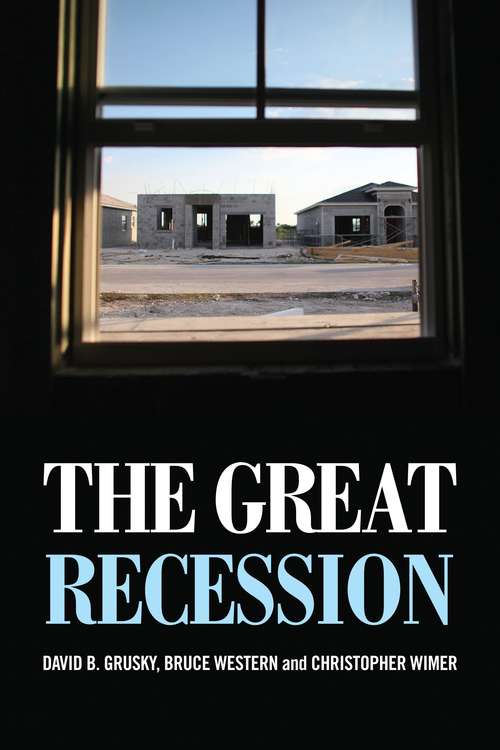 Officially over in 2009, the Great Recession is now generally acknowledged to be the most devastating global economic crisis since the Great Depression. As a result of the crisis, the United States lost more than 7.5 million jobs, and the unemployment rate doubled—peaking at more than 10 percent. The collapse of the housing market and subsequent equity market fluctuations delivered a one-two punch that destroyed trillions of dollars in personal wealth and made many Americans far less financially secure. Still reeling from these early shocks, the U.S. economy will undoubtedly take years to recover. Less clear, however, are the social effects of such economic hardship on a U.S. population accustomed to long periods of prosperity. How are Americans responding to these hard times? The Great Recession is the first authoritative assessment of how the aftershocks of the recession are affecting individuals and families, jobs, earnings and poverty, political and social attitudes, lifestyle and consumption practices, and charitable giving.

Focused on individual-level effects rather than institutional causes, The Great Recession turns to leading experts to examine whether the economic aftermath caused by the recession is transforming how Americans live their lives, what they believe in, and the institutions they rely on. Contributors Michael Hout, Asaf Levanon, and Erin Cumberworth show how job loss during the recession—the worst since the 1980s—hit less-educated workers, men, immigrants, and factory and construction workers the hardest. Millions of lost industrial jobs are likely never to be recovered and where new jobs are appearing, they tend to be either high-skill positions or low-wage employment—offering few opportunities for the middle-class. Edward Wolff, Lindsay Owens, and Esra Burak examine the effects of the recession on housing and wealth for the very poor and the very rich. They find that while the richest Americans experienced the greatest absolute wealth loss, their resources enabled them to weather the crisis better than the young families, African Americans, and the middle class, who experienced the most disproportionate loss—including mortgage delinquencies, home foreclosures, and personal bankruptcies. Lane Kenworthy and Lindsay Owens ask whether this recession is producing enduring shifts in public opinion akin to those that followed the Great Depression. Surprisingly, they find no evidence of recession-induced attitude changes toward corporations, the government, perceptions of social justice, or policies aimed at aiding the poor. Similarly, Philip Morgan, Erin Cumberworth, and Christopher Wimer find no major recession effects on marriage, divorce, or cohabitation rates. They do find a decline in fertility rates, as well as increasing numbers of adult children returning home to the family nest—evidence that suggests deep pessimism about recovery.

This protracted slump—marked by steep unemployment, profound destruction of wealth, and sluggish consumer activity—will likely continue for years to come, and more pronounced effects may surface down the road. The contributors note that, to date, this crisis has not yet generated broad shifts in lifestyle and attitudes. But by clarifying how the recession’s early impacts have—and have not—influenced our current economic and social landscape, The Great Recession establishes an important benchmark against which to measure future change.