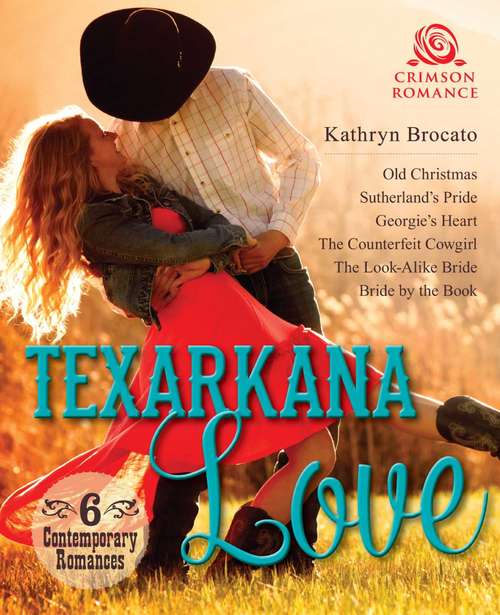 There's no straddling the line when it comes to falling in love with these cowboys and cowgirls—but in these battles, it doesn’t matter if you're Team Arkansas or Team Texas. Everybody wins!Old Christmas: When professional chef Casey Gray returns to the southeast Texas town where she grew up, she doesn't expect to feel anything for her former lover Kalin McBride. It will take every bit of determination Kalin has, plus a little help from the magical spirit of the holiday, to convince Casey that her future lies with him.Sutherland's Pride: Pride Donovan's former lover, Flynn Sutherland, does not recognize her little boy as his when she returns to the Texas Gulf Coast town of Anahuac. But he definitely wants his Pride back--can their second chance withstand the bombshell she's about to drop into his life?Georgie's Heart: Georgeanne Hartfield, author of the explosive nonfiction book Faking It, never counted on meeting a man like Zane Bryant, who makes her feel like a woman for the first time in her life. But if he ever discovers she's behind the infamous Fritzi Field pen name, how could he possibly believe that her response to him is the real thing?The Counterfeit Cowgirl: Felicity Clayton has carefully cultivated her fashion-house cowgirl image, so she's astonished to find the citizens of Foxe, Texas, dislike her almost before she steps out of her Dodge pickup. Aaron Whitaker, a local rancher, has no use for a flashy, fake cowgirl--so why is he beginning to feel an unwanted attraction to her?The Look-Alike Bride: Leonie Daniel leads a double life, often standing in for her glamorous older sister who works as a government agent. All Leonie has to do this time is spend a few weeks in Zara's lakeside cabin near Hot Springs, Arkansas, behave like Zara, and avoid Adam Silverthorne, the man her sister is interested in. But now Adam is falling for Leonie...or is he?Bride by the Book: Small-town Arkansas attorney Garner Holt badly needs an assistant to sort out his cluttered office, but he didn't expect a super-secretary like Miss Angelina Brownwood. She's perfect until an online search reveals a flaw: Angelina isn't a secretary. But does her secret mean she's also not the girl for him?Sensuality Level: Behind Closed Doors