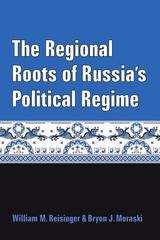 In The Regional Roots of Russia's Political Regime, William M. Reisinger and Bryon J. Moraski examine Russian politics at the subnational level in order to discover why democracy failed to take root and how Putin's authoritarian regime materialized. Since the national regime needed dominant victories in federal legislative and presidential elections, elections were critical to the resurgence of Russian authoritarianism. At the same time, victories without a traditional nationwide political party required that regional politicians help deliver votes. Putin employed a variety of resources to encourage the collaboration of regional leaders during federal elections and to sanction those who would or could not deliver these votes.

By analyzing successive federal elections, Reisinger and Moraski show that regions that led the way in delivering votes in Putin's favor were those that had been both more independent and more authoritarian during the Yeltsin era. These authoritarian enclaves under Yeltsin became models of behavior in the Putin regime, which prized deferential election results. Other regions were quick to follow this lead, functioning during Putin's ascendancy as "swing states." Still, Russia's regimes continued to exhibit regime diversity, with democratic enclaves resisting the push to become cogs in the Kremlin's electoral authoritarian wheel.

While motivated by scholarly questions about authoritarianism, democracy, and the influence of subnational forces on national regime trajectories, Reisinger and Moraski also consider policy-relevant questions.