Quantitative Monitoring of the Underwater Environment 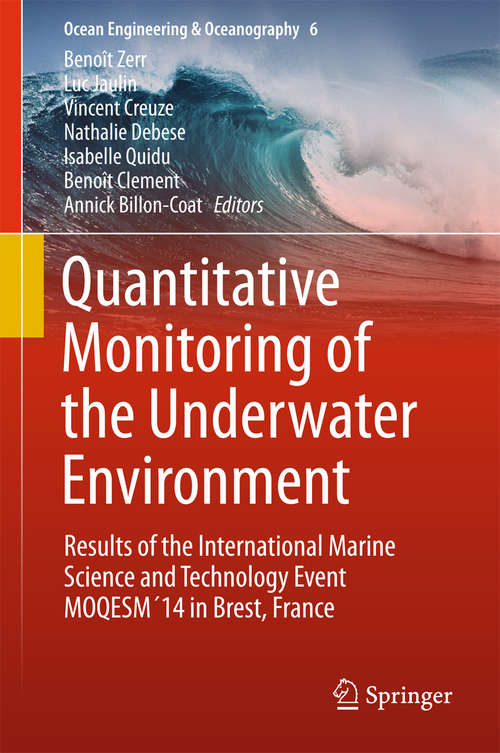 This volume constitutes the results of the International Conference onUnderwater Environment, MOQESM'14, held at "Le Quartz" Conference Center in Brest,France, on October 14-15, 2014, within the framework of the 9thSea Tech Week, International Marine Science andTechnology Event. The objective of MOQESM'14 was to bring together researchers fromboth academia and industry, interested in marine robotics and hydrography withapplication to the coastal environment mapping and underwater infrastructuressurveys. The common thread of the conference is the combination of technicalcontrol, perception, and localization, typically used in robotics, with the methods of mappingand bathymetry. The papers presented in this book focus on two main topics. Firstly, coastal and infrastructure mapping is addressed, focusing notonly on hydrographic systems, but also on positioning systems, bathymetry, and remote sensing. Theproposed methods rely on acoustic sensors such as side scan sonars, multibeam echo sounders,phase-measuring bathymetric sonars, as well as optical systems such as underwater laser scanners. Accurate underwater positioning is also addressed in the case of the use of a singleacoustic beacon, and the latest advances in increasing the vertical precision of Global NavigationSatellite System (GNSS) are also presented. Most of the above mentioned works are closely related to autonomousmarine vehicles. Consequently, the second part of the book describes some works concerning the methodsassociated with such type of vehicles. The selected papers focus on autonomous surface orunderwater vehicles, detailing new approaches for localization, modeling, control, mapping, obstacledetection and avoidance, surfacing, and software development. Some of these works imply acoustics sensing aswell as image processing. Set membership methods are also used in some papers. The applications of the work presented in this book concern inparticular oceanography, monitoring of oil and gas infrastructures, and military field.